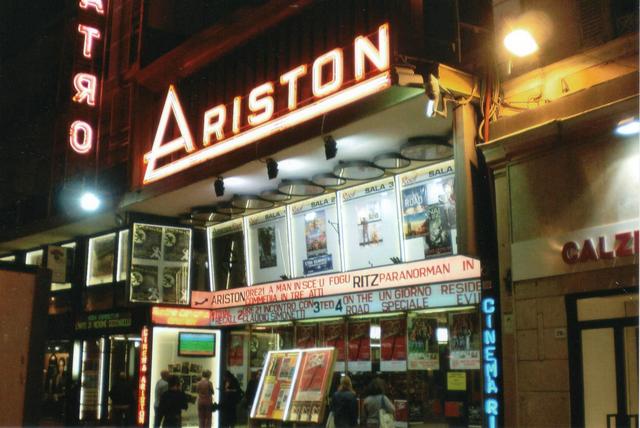 The Teatro Ariston was opened on 31st May 1963 with Marlon Brando in “Mutiny on the Bounty”. Seating was provided for 1,960 (today 1,909). This main auditorium has a beautiful frescoed ceiling by painter Charles Cuneo. It has a fully equipped stage and dressing rooms, and is still used primarily as a cinema. Since 1977 it has hosted the annual San Remo Music Festival which is held each February. The Cinema Teatro Ariston was the first cinema in Italy to be equipped with a Cinerama screen.

There is a small 450 seat auditorium in the basement which today operates as the Cinema Ritz (today with 390 seats). It has a sea-shell shaped auditorium with metal reliefs by sculptor Edward Alfieri. In 1994, a 4-screen cinema was built on the roof of the theatre. These screens have seating for 135, 135, 135 and 35. The Cinema Teatro Ariston has been equipped with digital projection in all its screens since December 2010. It also has 3D capability.