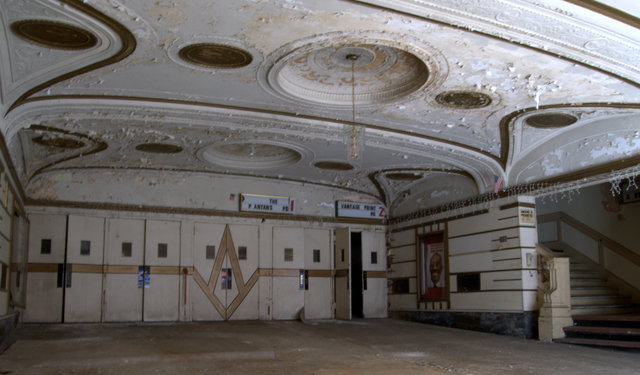 The Ridgewood Theatre is located on Myrtle Avenue in the Ridgewood section of Queens. It first opened on December 23, 1916 with ‘6 Big Acts of Vaudeville and Feature Photo Plays’. It was operated by William Fox and boasted a 3,000-seat capacity.

It was last operated as a five-screen multiplex by the same people who run the Jackson Theatre and ran the now-closed Loew’s Plaza Corona Theatre.

The owner announced in March 2009 that the theatre would reopen with a three screen cinema on the upper level and a mix of shops on the first floor. The Ridgewood Theatre was given Landmark status on January 12, 2010. Despite support to save the building, it was gutted in November 2014. In January 2016 it was being converted into housing, with the former foyer set to be a retail unit, which actually opened as a health club.

Yes, one would think that the lobby could have remained intact as the entrance to the apartment building that the Ridgewood Theatre is being made into.

Ironically, on Page 2 of the March 26 – April 1 2015 issued of Time Out New York Magazine is an article titled “Ridgewood On The Rise” about new bars and restaurants in Ridgewood. Bierliechen at 582 Seneca Avenue between Grove and Menahan plans to serve sauerbraten, which will make it the first place to serve German food in Ridgewood, other than the Blau Weiss Gottscheer Hall at Fairview and Linden, in a LONG time.

You are absolutely right Bway, especially since the lobby could have been a terrific gateway to the residence. But I guess the bottom line – and a severe lack of imagination – said otherwise.

Hey guys, haven’t been on Cinema Treasures in quite a while. I happened to be in the neighborhood and saw construction set up around the old Ridgewood. So I said, let me see what’s going with this place. I approached the Cypress Avenue side of what where the exit doors and an old security guy was there and got up abruptly, as if to tell me to get the hell out of there. Quite the contrary. Anyway, I just took a tour of the old Ridgewood Theater. This place is gutted and is being set up to be an apartment building. The old lobby will be a retail space for the tenants there. The old security dude was cool as hell and allowed me to see the shell of the old movie house. The building is completely gutted, save the new beams and sheet iron. I took plenty of pictures. The security dude was a bit weird about the pictures somehow ending up on social media, so I am feeling that all out lol. In the meantime, if anyone wants to see any of the pics, e-mail me at .

When I walked by today, there were no construction guys or any indication that work has been done.

Sign on marquee is gone. A walk around the block reveals “1680 Madison Street” a 54-unit, five-story building in the former auditorium.

A current picture of the Ridgewood posted in Facebook indicates that the 1st floor commercial space will be occupied by a health club; this is the same use that currently operates in the old Parthenon Theatre.

A new picture on Face Book now shows that the health club is, in fact, open. Its advertising sign currently adorns the old marquee. Hopefully, someone will post this on this page.

Blink Fitness is currently closed due to pandemic regulations. A selection of photos can be viewed here

I believe this Wednesday – 9/2 – will be the opening date for the gyms, including I guess this one.