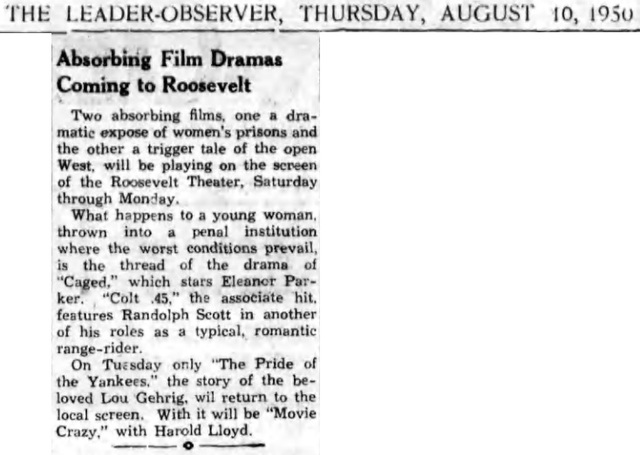 The Roosevelt Theatre opened on May 7, 1921. Last operated by Randforce, after it was closed it was converted into a Roman Catholic church.

YOUR MAP HAS IT OUT IN THE BOONDOCKS SOMEWHERE

The Roosevelt has been converted to a day care use and is owned by the ghurch which is around the corner. The exterior of the building doesn’t have a marquee, but looks like a theatre facade. This is not to be confused with the other Roosevelt Theatre in Queens which became the UA Quartet.

The map currently shown is correct. I used to go with a gal by the name of Alice Moran who lived on 88th St south of Jamaica ave.

Robbie, negatory. I went to Brooklyn Tech., class of 1955

Thanks Tonino. I was Lane class of 63'…robbie

I attended St. Thomas the Apostle Church on 88th Street in Woodhaven. The church became so overcrowded that the parish purchased the Roosevelt Theatre and converted it into a church auditorium where masses were said in addition to the masses in the original church. The auditorium was named “Monsignor John Mulz Hall” after the priest who ran the Church until 1966. We sat on folding chairs during the mass and the Church also held their basketball games there. I also remember going to Friday night “teen” dances at that hall during my high school days. Needless to say, except for the high ceilings, all remnants of it ever being a movie theater were gone!

Did anyone ever see movies here who can tell us some more about this theatre?

Anyone who grew up in Woodhaven and wants to get in touch with old friends,meet new friends and remember what it was like growing up in Woodhaven we started a family friendly group on the Yahoo site.Although you need to join to get on the site you can choose to get the messages sent to your “E” mail or just read them when you want to from the site.Just go to the Yahoo home page and click on groups.Then type in woodhaven-nyc and you will get to our group.If you don’t find anyone you know chances are someone knows where your friends are today……..Welcome and enjoy!!!

Back in the 1950’s I remember the local Woodhaven stores (and I’m told St. Thomas)gave away cards approx.4"x14" which showed the upcoming Saturday Matinee.The Roosevelt usually had 2 movies,4 or 5 cartoons and previews.The gimmerick was if you had the same color card they had in the box office window you got in for free.Of course we put the 25 cents saved to good use at the candy counter.And yes I did have the right color card once.!!!
The two movies that stick in my mind seeing at the Roosevelt was one of the Davy Crockett movies with Fess Parker and Vincent Price in House on Haunted Hill.(not on the same billing)