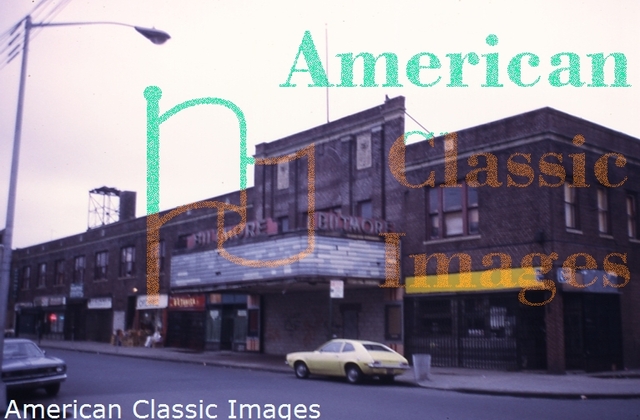 This theatre stood in the East New York section of Brooklyn. It was opened around December 1927. A Robert Morton organ was initially installed, but this was replaced by a Wurlitzer 2 manual, 10 rank instrument in 1928. It was a Randforce house before becoming a UA theater before it finally became an independent showing double features for a dollar.

The neighborhood went down and the movie house went with it, closing in 1971. Many times over the years, it came up as a centerpiece for its block’s revival, but nothing ever happened. The Biltmore Theatre was demolished a few years ago.

David, the pictures you have posted are of the “legitimate” Biltmore in Manhattan, not the one in Brooklyn. Compare with the existing photos. Obviously not in the same neighborhood. The Biltmore in Manhattan was vacant for many years. Then someone set a fire. It was then acquired by the Manhattan Theatre Club. It’s in the upper west 40’s between Eighth Avenue and Broadway on the north side of the street. The name Biltmore on the theatre’s facade faces Broadway.

Just went back to CT and keyed in “Biltmore”. The legit theatre in Manhattan is now called the Samuel J. Friedman and is on West 47th Street. Please upload your pictures to that site. I don’t know if it’s possible for you to delete a photo (the way you can with a comment).

DavidZornig, if you’d like to add those images (which I see you’ve already removed from this page) to the correct theater, Here’s the page for the Biltmore in Manhattan.

CT has already deleted those photos. Unfortunately they did not post them to the correct page before doing so. And I am unable to find them in my files, because they had Facebook generated numbers that had 100 digits. If I happen across them again, I will post them where they belong.

Try contacting CT. Maybe they can still access them.

Luckily I just found the FB page they were originally on, via the rarely used Activity Log on FB. I’d forgotten I commented about Hair’s producer Michael Butler’s Chicago connection. I have downloaded them and re-posted them to the correct theater. Oddly they are the only 2 photos on that page. And only 10 comments.

I believe the Manhattan Biltmore was only showing movies for a short time so there is no history.

And most of the comments on the Manhattan Biltmore page debate that very issue!

Does Anyone remember a Woman Manager of the New Lots Biltmore Movie Theatre named Irene Stoller? She was my Grandmother RIP. Growing up in the Biltmore was unbelievable. I used to go behind the Screen with the Usher named Helen (who also sold tickets & worked at the Concession) The Drapes had to be adjusted according to what Movie was being shown,wider,shorter… Mom used to drop us off sometimes after School. I’d do my Homework in Grandma’s Office and then go play in my “Indoor Playground”. Good Times!!!