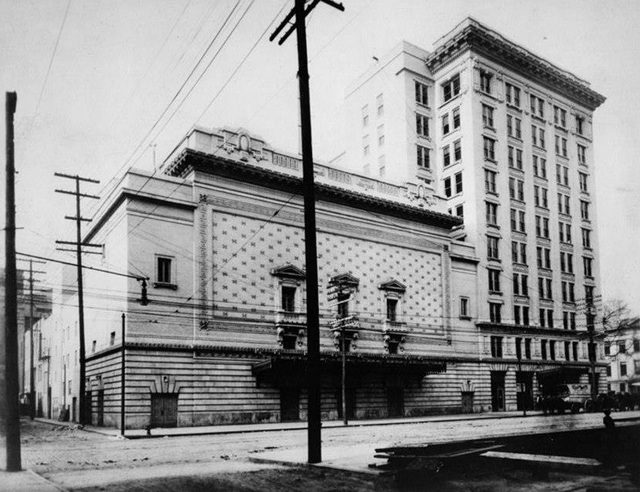 The Hartman Theater was located in downtown Columbus, Ohio, a block from the State Capitol. It opened November 13, 1911 with the stage musical comedy “The Pink Lady” presented by Klaw & Erlanger. The Hartman Theater was opened initially as a place where Columbus citizens could go to see live performances of the finest plays and other artistic works. Seating was provided for 1,735, with 639 in the orchestra, 596 in the balcony and 500 on long wooden benches in the gallery.

Since, its early years, the Hartman Theater also showed films, including many of the roadshow epics from the silent era.

The Hartman Theater closed in 1969 and was demolished for a parking lot in August 1971.

Here is an early photo of the Hartman Theatre from the Knowlton School of Architecture web site. Thumbnail links to two additional photos of the theater and one of the adjacent office building appear at the bottom of the page.

Here is an additional photo from the Columbus Metropolitan Library.

The Hartman Theatre was built by Dr. Samuel Hartman, who had made a fortune from an alcohol-heavy elixir called Peruna, the formula for which was, he claimed, revealed to him in a dream about a long-dead American Indian chief of that name. The theater must have been one of the more impressive monuments financed by America’s legion of tipplers-in-denial. It’s too bad this impressive building didn’t last much longer than a heavy drinker’s liver.

The site of the Hartman Theatre and its adjacent office block, now occupied by a larger modern office building, is across the street from another Richards, McCarty & Bulford project, the Romanesque Revival style U.S. Post Office and Federal Courthouse, built in 1883-1887 and, happily, still standing.

The September 18, 1936, issue of The Film Daily said that the Hartman Theatre, which had been closed all summer, would reopen with a stage production on the 29th of that month, and would follow its policy of the previous season, alternating stage productions with movies.

There aren’t many people that are still around that have seen a film at the Hartman. I bought the projection equipment from the demolition company (Lowendick) and removed what I could carry. The projection equipment had very little use and the booth was an add-on in the middle of the upper balcony (gallery). It had Western Electric Universal Bases with Vitaphone turntables and Simplex Standard projection heads. Beneath a trap door in the booth were the battery racks that still had two full sets of glass jar batteries to run the sound system. The stage speakers hung on a line set with a track to pull them off left to the scene dock. Most of it was still intact and the projectors would still turn over. There were several reels of film (mostly screen ads and all nitrate) that I donated it to the Library of Congress. John3570

Eugene O'Neill’s A Moon for the Misbegotten, a sequel to Long Day’s Journey Into Night, had it world premiere at the Hartman Theater in 1947. Cyril Cusack, Franchot Tone, and Wendy Hiller starred. (Wikipedia)