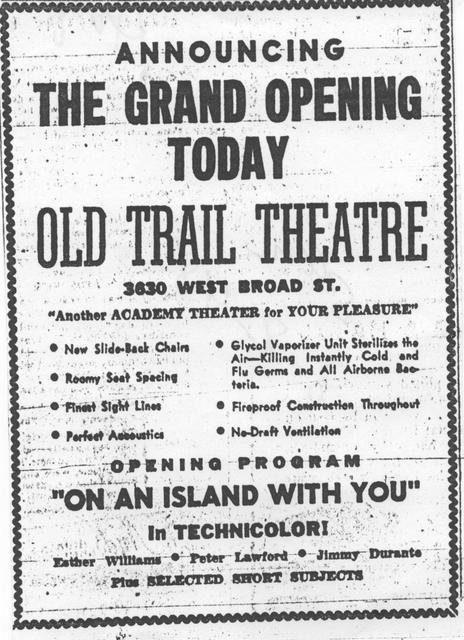 A neighborhood second-run theatre located on the westside of Columbus, Ohio. The Old Trail Theatre was built as part of the new West Broad Street Shopping Center. The name “Old Trail” derives from its location on the historic National Highway. The movie house was “constructed of white painted brick, with stylized Chinese design motifs,” as reported in the Columbus Citizen newspaper. The theater opened on Sunday, August 8, 1948 with Esther Williams in “On an Island with You”. It had 1,300 seats, all on a single floor. The Old Trail Theatre had a short life, closing in the late-spring of 1951.

Today the site is still a shopping center.

Circa-1950/51, I recall busing on a Sunday afternoon to the faraway, westside Columbus theatre the Old Trail for a reissue double feature of “A Thousand and One Nights”and Abbott and Costello in “Pardon My Sarong.” Outside, I observed the 40 x 60 poster for “Nights” did not say Technicolor. I asked the girl in the ticket booth, “Isn’t this in color?” She pointed to the Columbia credit on the poster and replied, “This is a Reprint.” Inside, the storybook credits on the screen had black bars superimposed on the two for Technicolor.
A great afternoon for a kid at a 1,300-seat theatre that lasted only from 1948 – 1951. This must have been one of its final shows.