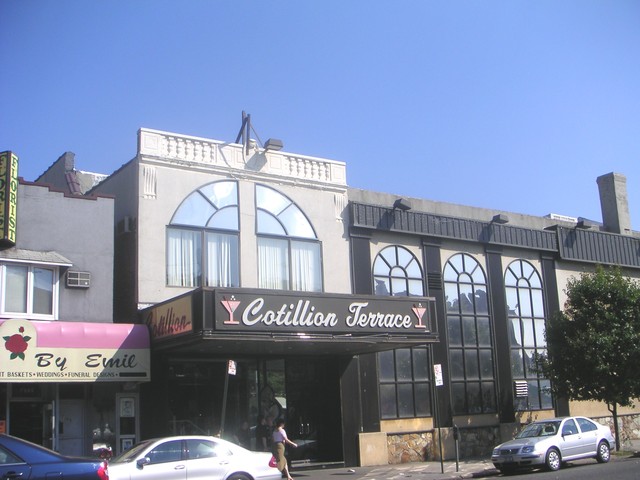 The Senate Theatre stands on 18th Avenue near 73rd Street in Bensonhurst. It opened in April 1926 with 1,175 seats. Mayor James J. Walker attended the opening. It had seating provided in orchestra and balcony levels. In November 1927, a Wurlitzer 2 manual 10 rank theatre organ was installed.

The Senate Theatre ran second run fare at the time it closed in 1958. After closing as a movie theatre, the building now served as a catering hall for many years. By 2015 it was in use as a Salvation Army thrift store.

Is that The Cotillion Terrace?

The Cotillion Terrace was originally the Senate Theatre, one of Fox-Metropolitan’s 42 Brooklyn Theatres in 1931. The Senate was 9 blocks away from the same company’s Walker Theatre. I believe the theatres' screen wall was on 74th St. The marquee frame is now the name and canopy of the catering hall. All the seats were on the orchestra level. The ceiling and sidewalls maybe intact in the hall if no major alterations occured when movies ceased in 1957. The neighborhood movie house opened in the early 1930’s.

Posted for PhilPhil by Theaterat. The Senate was not an old theater when it closed in 1957.It was a fairly spacious house with three blocks of seats seperater by four aisles. The interior was done in light green and white and featured columns and decorative plasterwork throughout the interior. There wetre also plaster reliefs of American type eagles as a decorative touch. There was a seperate entrance from the lobby to the orchestra, and the screen was large.The theater also had a domed celing. Even though it opened in the early 1930s, some older local residents claimed that silent films were shown from time to time.This theater was 10 blocks away from the more opulent Walker and 9 blocks away from the dumpy Colony. it was also close to the little but neat Hollywood and the majestic Oriental. This theater had air conditioning and a sign over the entrance said “cooled by refrigeration”.I remember going there with my father on a very hot and humid summer night, probably in 1956 to see 20,000 Leagues Under The Sea….the great movie based on the Jules Verne classic. We were totally blown away by it! It is still one of my favorites, but the small screen does not do it justice.That was the last time I went to the Senate. It became a catering hall called the Cotillion Terrace. Each time I went to an affair there, I always thought about the theater that once occupied that space.

The Senate Theatre brings back memories. As a young boy my main mode of transportation was my bike. I used to hand out in an ice parlor that was right next door to the Senate. One afternoon as I was parking my bike a man approached me and asked if I wanted to be in a movie. He said that if I came with him that he would get the right papers so that I could get paid. All I had to do was ride my bike and throw a newspaper. Not only would he pay me but I would get to keep the bike that they would supply. All I could think was that this guy was a pervert and I told him to shove off or I’d call the cops. About an hour later and acquaintance came in and said that he was going to be a movie. We all laughed. Later we found out that his parents had already inked the deal and it was a fact. In fact his parents had already received $100 for the bit part. The movie was the Kiss of Death with Victor Mature. Heck I could have been a contender. But I think that was already said.

Larry C…. Richard Widmark will ALWAYS be remembered as that giggling sicko who pushes the woman in the wheelchair down the stairs!Posted by Theateratb for PhilPhil

I don’t know if anyone will ever see this but…I dug up two pics of the Senate from NYC tax records. Can’t find ANY others…