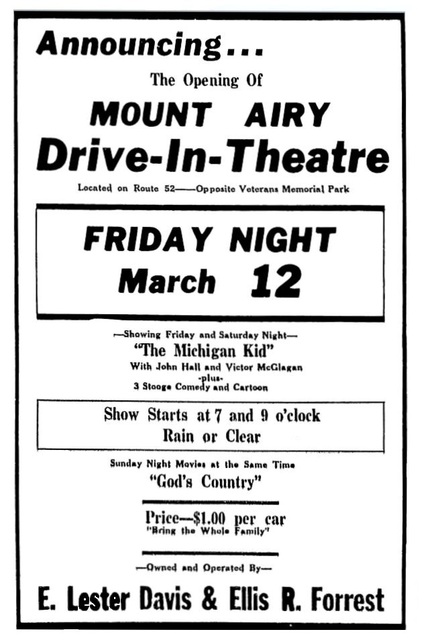 The Mount Airy Drive-In opened on March 12, 1948, featuring the 1947 movie “The Michigan Kid” with John Hall and Victor McLaglen, Rita Johnson and Andy Devine. In addition to the movie, a Three Stooges short and a color cartoon were played. It was the first drive-in to open in the area. The theater was owned by E. Lester Davis and Ellis R. Forrest. Don Davis, who is Lester’s son, would eventually take over the operation of it. On August 11, 1950, Davis and Forrest would open up the first location of the Bright Leaf Drive-In, south of Mt. Airy on U.S. 52.

The Mount Airy Drive-In screened features on a 48 ft. x 50 ft. screen tower. The drive-in had a parking ramp that could hold 400 cars with in-a-car heaters. Open year around, the drive-in would close only when forced to by inclement weather. When it opened, the admission was $1.00 per car, no matter how many people were jammed inside of it. Cigarettes were only 15 cents; cokes and popcorn were only 5 cents each.

In February of 1955, work was started on the installation of a CinemaScope screen tower. Other improvements were in the concession stand, restrooms and “moonlite lighting”. On holiday weekends, Davis would be screening dusk to dawn movies. As the sun would rise in the morning, a few cars would be still left in the parking field. Into the early-1970’s the drive-in would screen mostly “X” and” R” rated movies. The screen tower sat in the front of the parking field, so it was not facing Lebanon Street. In the spring of 1981, heavy wind ripped giant holes in the screen tower and the fence surrounding the drive-in was also damaged. The new lease agreement for the land was coming up, so the decision was made to close. Davis closed the Mount Airy Drive-In in 1981. It was demolished and the site is now used for a church.