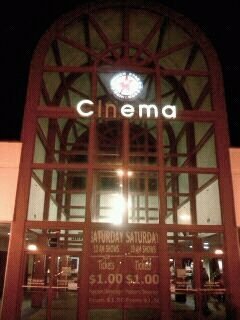 Opened May 9, 1986 as a General Cinemas location showing first-run films, it was purchased by Entertainment Film Works in 2001 and from 2002 by TouchStar Cinemas. TouchStar ran it as a discount second-run theater which also ran the periodic independent or classic film.

TouchStar closed Promenade 6 in summer 2011, only for the management of the shopping center to open and operate it themselves a few months later running second-run films. It was closed on January 19, 2015.

The theatre has been opened since 2010 under new ownership and management. It is the lowest priced movie theatre in Orlando and also features the lowest price concessions. It still shows the best in second run features. It is called simply Colonial Six Cinemas now and I am the general manager; Shawn Surface, the place is a little “rough” around the edges but still runs solid. :)

Shawn, Do you think the owner will put some money back in this place to clean it up a bit? Seems kind of like no one really cares anymore.

Is it true the owner of the shopping center is the ones managing as well now?

This closed down in 2015 and gutted for retail. It opened by General Cinemas on May 9th, 1986. Taken by James Duffy’s Entertainment Film Works in 2001 and Touchstar Cinemas 2002-2015. Grand opening ad in the photo section.

The Colonial Promenade, which had opened on May 9, 1986, was closed along with many other General Cinema Corp. locations on September 28, 2000 as the circuit was on its last legs. The chain’s reliance on aging multiplexes was decimated by other chains which built modern megaplexes. Along with the Colonial Promenade, General Cinema also vanquished the Lake Mary Centre 8, Altamonte 8, and Fashion Square that day to exit the Orlando market. GCC would announce its bankruptcy plans which found its skeletal remaining portfolio of theatres eventually sold off to AMC Theatres.

Entertainment Film Works Theatres Circuit of Florida (EFW) took on this venue and the Altamonte 8 - both on 5-year leases. EFW’s Colonial Promenade 6 bowed on August 6, 2001 and EFW found out what GCC already knew - that the going was very difficult. The circuit shuttered the venue just a year later October 31, 2002.

TouchStar gave the theatre a successful relaunch as a second-run discount house beginning on June 13, 2003 with sellouts occurring often on busy weekends and ultra-discounted pricing on Tuesdays. TouchStar left the venue on May 22, 2011. On September 23, 2011, the shopping center found operators to run the theatre as part Bollywood and part second-run features. The popular theatre closed just shy of its 30th anniversary on January 29, 2015.