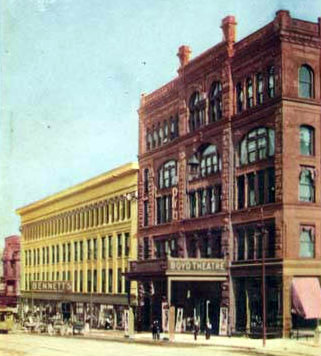 It was rebuilt immediately at the southeast corner of 17th Street and Harney Street. In 1914 the Boyd’s Theatre was sold to the Burgess-Nash Co. who closed and razed it to build an annex to its department store. (See Lucille Barbe’s “A History of the Boyd Opera House in Omaha, Nebraska [University of Omaha, 1963, p. 166], Steve Millburg’s "Culture and the Fine Arts Got Early Start in Omaha” [Omaha World-Herald, August 18, 1985]; Jeffrey Spencer’s “Building for the Ages: Omaha’s Architectural Landmarks.” [Landmarks, Inc., 2003, p. 20.])

This photo of the Boyd Theatre probably dates from the late 1890s or early 1900s. Using maximum zoom, it can be seen that the posters in front of the theater advertise Anna Held, who Florenz Ziegfeld brought to the United States in 1896.

The facade of the theater exemplifies the commercial phase of the Romanesque Revival style of architecture. An article about the soon-to-open theater in the August 31, 1891, issue of the Omaha Daily Bee said that the interior of the house was also done in what it called the “modern Romanesque” style.

A scan of the Daily Bee article is online here as part of the Library of Congress’s “Chronicling America” collection.

I’ve found a couple of web sites (including Wikipedia’s article on downtown Omaha) that say the Boyd Theatre was demolished in 1920, but I’ve also found an announcement of the plans to demolish the theater in the May 23, 1914, issue of The American Contractor. The item said that preliminary plans for the addition to the C.B. Nash Co. department store to be built on the theater’s site were in progress.