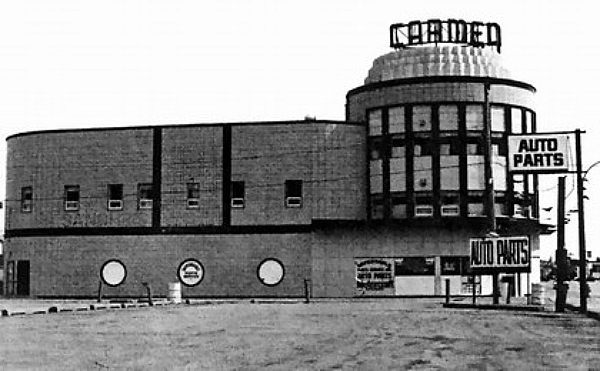 Opening shortly after the larger Dearborn Theatre, in early 1941, the Carmen Theater was another Art Moderne style movie house with an unusual gear-like dome over its lobby, rising three stories high. The theater’s name was spelled out in large, illuminated letters on the roof.

The Carmen Theater could seat 1,490, and operated as a movie house through the 1980’s. It is was last used as an auto parts store up until a few years ago before that was closed. It has since been razed and replaced by another commercial structure.

Here’s a glimpse of the auditorium of the Carmen Theatre in Boxoffice, August 16, 1941. The caption says the house is a slightly smaller twin of of the Civic Theatre in Detroit, built the same year and designed by the same architect, Kenneth S. Frazier.

Boxoffice didn’t give the seating capacity in this particular item, but judging from the photos it doesn’t look as though it could have held the 1,490 seats currently listed above. Still, an item in the May 28, 1955 Boxoffice says that it had 1,500 seats. If it was enlarged some time after its opening I’ve been unable to find anything about such an event in Boxoffice.