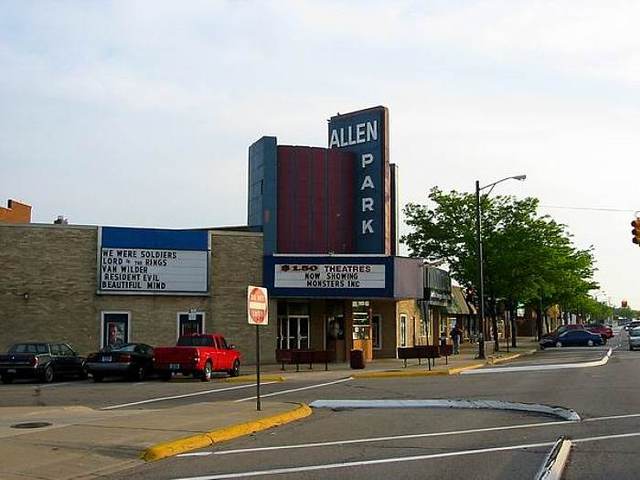 Opened in 1940 as a single-screen, Art Moderne style house seating over 1,600, the Allen Park Theatre was designed by the firm of Bennett & Straight.

Later, the Allen Park Theatre was run by Nicholas George as the first of many theatres under his operation during the 1960’s and 1970’s, such as the Mai Kai Theatre in Livonia, the Americana Theatre in Southfield and (briefly) the Michigan Theatre, in downtown Detroit.

The Allen Park Theatre was twinned as the Allen Park I & II in 1970. In 1986, George sold the twin to the AMC chain, who would later carve the theater further, into five screens.

Later operated by the MJR chain, as the Allen Park Cinema, the theatre became a bargain house screening second-run fare. In 2015 it was taken over by an independent operator and renamed Allen Park Digital Cinemas. It was closed on October 10, 2019. In January 2022 it was announced that the former theatre would be demolished.

A great looking exterior. The WaterWinterWonderland pic doesn’t do it justice. The marquee looks great lit up inside. Sadly I couldn’t see the interior as I was walking/performing in a parade.

I remember seeing John Carpenter’s The Thing here when it was still a twin. They had the AC cranked up, which added to the whole paranoia-at-the-South-Pole thing.