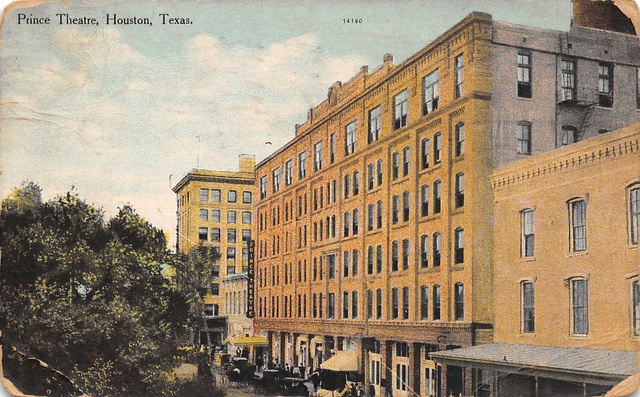 The Prince Theatre occupied a portion of a large five story commercial building. It had a corner entrance with a tall vertical sign above spelling out “PRINCE THEATRE”. It was opened on September 24, 1908. It became a movie theatre in September 1916. It was still open in 1926, but had closed by 1927.

According to David Welling’s Cinema Houston, The Prince Theatre was located at 320 Fannin Street, on the site of the Houston Theatre (originally Sweeney & Coombs Opera House), which had been destroyed by a fire. The Prince Theatre opened on September 24, 1908, with a play. It presented plays, vaudeville, and movies at various times, was briefly a Loew’s vaudeville house in the early 1920s, and in 1922 was leased to a stock company.

In the 1930s the theater was converted into a four-level parking garage. It was eventually demolished, but Welling doesn’t give the date. The building now on the site, the Harris County Administration Building, looks to date from the 1970s, but the theater might have been long gone by the time it was built.

None of the period sources I’ve found so far give the seating capacity, but it must have been a fairly large theater. Here is the announcement of the opening that was published in the October 10, 1908, issue of The Billboard:

“Most auspicious was the opening of the New Prince Theatre at Houston. Texas, on September 24. In the Land of Nod was the opening attraction, and pleased capacity business. The season of 1908-09 may be said to have commenced for Houston theatregoers.

“On entering the new auditorium, the first effect produced is a sense of clear spaciousness, and this impression deepens with further experience. The flooring of both balconies, and the steps of all the stairways throughout the building, are of concrete. The exits are numerous, wide and easy of access. The predominating colors in the auditorium’s furnishings are of dark green and cool gray, with a lavish use, as high lights, of brass bars and gold brush work. The paintings of figures and scenes, put in as ceiling and side wall frescoes, are all fittingly artistic.

Multiple sources indicate that the Prince Theatre was designed by the Houston architectural firm H. C. Cooke & Co.. Henry Collier Cooke was an English architect who began practicing in Galveston around 1891, then practiced in Corsicana for a while before establishing himself in Houston around 1901. His son William A. Cooke joined the firm in 1905.

The Prince became a full-time motion picture theater in September, 1916.