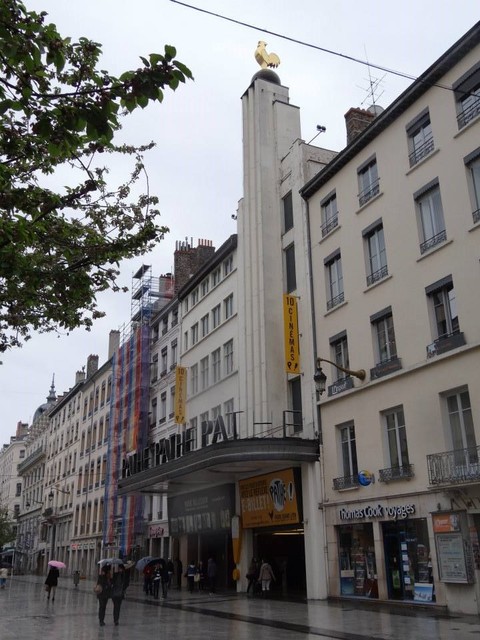 Located in the city centre and built on the site of the Casino Kursaal. The Pathe Palace was opened in 1933 as a single-screen Art Deco style cinema with 1,600-seats in orchestra and two balconies. It is a rare example of this style of architecture in Lyon. It was built by the Pathe Freres chain, owned by Charles Pathe & Emile Pathe.

It has since been sub-divided into 10 screens, and is now operated by Gaumont-Pathe. It is an all digital cinema, and is equipped to screen 3D films.

I’m not sure it was ever just called the Bellecour, but until at least the early ‘50s, it was the Pathé Palace.

Every instance of Pathe should be corrected to Pathé.

By the way, the current marquee is a reproduction of the original. Based on some more research, the architect was Eugène Chirié. It was opened as the Pathé Palace, became the Pathé Natan in 1934 or maybe 1935, returned to Pathé Palace in 1945, and became simply the Pathé in 1993.

There was a really ugly remodel in 1972, when the original auditorium was chopped into 4 screens with a total capacity of 1,850. A fifth screen was added in 1979, and three more in 1986. It closed in 1995, and reopened in 1996 with the present appearance and configuration. Apparently only the facade is original, the rest is new construction.

As originally constructed, the capacity was 1,600 with two balconies.