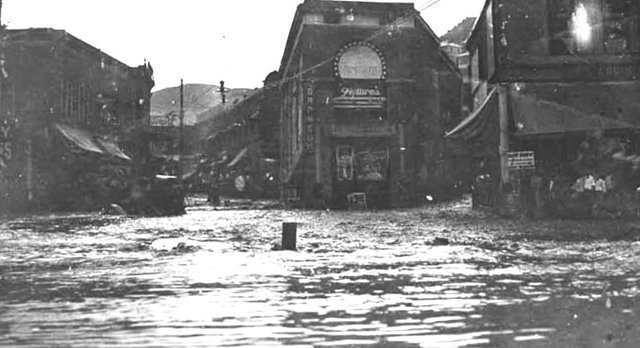 In the old business section of Bisbee’s ‘Brewery Gulch’, Swiss immigrant Joseph Maria Muheim (1867-1951) came in 1888, began as a bartender and rose to affluence as a local merchant, banker, investor, mining magnate and builder. In 1905, he constructed the imposing Muheim Block (The Brewery, still standing) and the Orpheum Theatre which opened on July 24, 1907 at the foot of Brewery Avenue, the location of today’s Goar Park. The theatre was managed by C. J. Alden, and it did not survive long.

This web page has a photo of Bisbee’s Brewery Gulch with the Orpheum Theatre in the 1920s.

A Facebook post from the Bisbee Mining and Historical Museum says “[t]he Grand Theatre at the mouth of the Gulch later became the Orpheum.” The Orpheum was already listed in the 1914-1915 American Motion Picture Directory.

This brief article about silent film comedian Roscoe “Fatty” Arbuckle says that for several months in 1909 he was a resident of Bisbee, where he appeared regularly on the stage of the Orpheum Theatre.

Although the Bisbee Mining and Historical Museum says that the Orpheum opened as the Grand Theatre, a book called Arizona on Stage: Playhouses, Plays, and Players in the Territory, 1879-1912 by Thomas P. Collins doesn’t mention the name Grand. It merely says that the Orpheum Theatre was built by a Swiss immigrant named Joseph Maria Muheim who had prospered in Bisbee, that it opened on July 24, 1907, and that it was designed by local architect Fred C. Hurst. The original seating capacity was 1,000, according to the 1909-1910 Cahn guide.