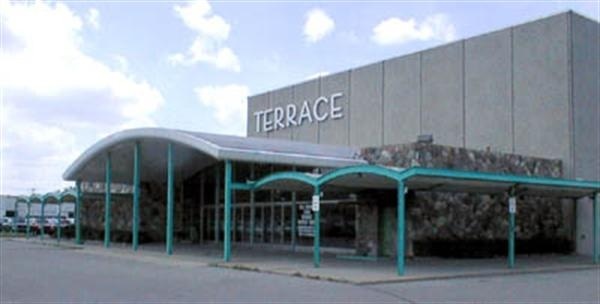 The Terrace Theatre was the first new movie house in the Detroit area opened since the late-1940’s, not counting the Campus Theatre in Ann Arbor (1956). It opened September 20, 1962 with “The Music Man” which was released in Super Technirama 70 (70mm with stereophonic sound).

The Terrace Theatre sat around 1,200 and was designed by Ted Rogvoy, who also was responsible for area theatres like the Mercury Theatre in Detroit and the Penn Theatre in Plymouth.

It was designed in ‘Chinese Garden’ style, with minimal interior decor, though its canopy marquee was one of the largest ever built in the state, at 52 feet long. Also, its screen was enormous, as well, measuring 59' by 27'.

The Terrace Theatre originally was operated jointly by the Wisper and Wetsman and Suburban Detroit Theatres chains.

In the early-1970’s, the auditorium was twinned, and it became the Terrace 1-2. In the 1980’s, it was turned into a quad, when taken over by the Cinemark chain, and renamed the Cinemark Terrace 4.

The Terrace Theatre closed, and was later converted into an auto showroom for a local dealer.

Now it is a car showroom for local Ford dealer Bill Brown. That man upsets me so much….

I’m fairly sure that the theater itself is not used by the dealership, just the parking lot as an overflow lot.

Here is information about Brown’s properties from the dealer website:
http://tinyurl.com/6xrgjp

Saw many movies there over the years, especially when it became a $1.50 movie house running second and third run films. Cheap way to have some fun on a weekend night.

Do remember seeing Empire Strikes Back there, and the line to get in was down the side of the building, around the back, and back up the other side. Crazy times. LOL

Oh, and to add, it’s now the Collision Center for Bill Brown Ford. Their problem is not enough space for their operations in one location on Plymouth Road, so they’re spread out from Wayne Road all the way to almost Middlebelt Road. They also used the former Mai Kai theater parking lot as an overflow lot for years until it was torn down.