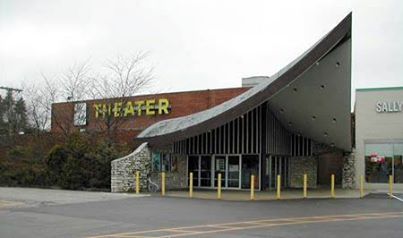 This 1960’s-era shopping center theater, which opened as a single-screen house, was eventually carved into five small auditoriums.

The theater’s most notable feature, however, was the huge tent-like awning over the main entrance, soaring like a boat’s prow over the parking lot.

The Morton Grove closed in 2001. The building first served as a shoe store, and is now a fitness center.

I miss the place after seeing this.

I miss this place. I think the last movie I saw here was “Bulworth” and as I recall, the place was packed!

My sister lived nearby at the time. I also recall her saying how she was so surprised this place closed.

I grew up going to this theater and have very fond memories of the time I spent there. My father was the projectionist there from the time it opened (I think) until late November of 1984. When I was allowed to go to work with my Dad I would sometimes sit down in the house and watch with the other patrons but more often I liked to stay up in the projection booth with him. I watched him splice film, make changeovers from one projector to the other and change carbon arcs, etc. My Dad had a large reel to reel music library that he selected from to play for the moviegoers when the pictures were not running. When she was old enough, my cousin worked there at the candy counter. I remember that upstairs next to the projection booth there was a huge room full of HVAC equipment and it was very loud and I had to stay out of there. I really do appreciate seeing the picture that was posted by “Life’s Too short”. I loved going to the Morton Grove. Thanks for the memories…..

Nice looking theatre i bet with one screen,but they just have to mutiplex everything for that buck.Good stories to read.

Great Theatre Story roolem,good to hear that from someone who lived it.Welcome to Cinema Treasures.

Thanks for the welcome. Does anyone know what the upper floor of the building is being used for now?

Drove by yesterday and saw that the facility is now a fitness center. This seems to be the fate of a lot of these older multiplexes, just like what happened to the nearby Golf Mill 1-2-3.