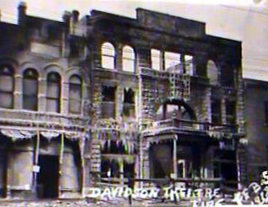 Opening night was September 8, 1890 for the quarter of a million dollars Davidson Theater. John and Alexander Davidson, wealthy Chicago brothers, built the Davidson Hotel. Housed within the building was the Davidson Theatre, whose entrance was through the front of the hotel. Architects were Burnham and Root. Its spaciousness was in the style of the 1890’s. It had a half acre of lounge and office space extended behind the second floor balcony; the manager had a huge room, which was adjoined by one, equally large, for the press agents and company managers, who had ample space for desk work for dozing after their labors. It was only a half block from the busiest corner in town and Union Station was only a block and a half. They hired Sherman Brown, a 22-year-old from Oshkosh, Wisconsin as the first manager. In 1894 it was severely damaged by fire, and was rebuilt.

Its theatrical history was interrupted occasionally by films. In August and September of 1898 showed “all the pictures of the late War” (Spanish-American war) were projected with “Thrilling Pictures of USS Battleship Maine.” “The Birth of a Nation” was shown in 1915, at prices ranging from a quarter to a dollar.

Alas the final attraction was the Canadian National Ballet Company, it closed in 1954 and the wreckers moved in, March of 1954. Its life span was 63 and a half years presenting plays, vaudeville, film and musicals.

Sometime prior to December, 1929, the Milwaukee architectural firm Dick & Bauer did some work on the Davidson Theatre. The house was on a list of their projects that was published that month. No details about the nature or extent of the project were given.