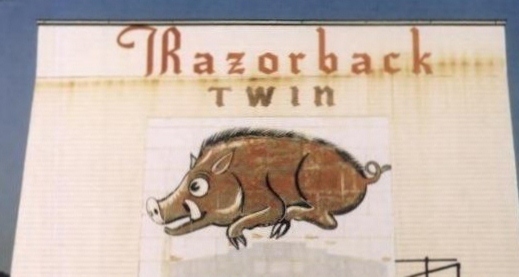 The history of this drive-in was confusing so any corrections would be great. Opened as the Riverside Drive-In on June 12, 1953 and was operated by Robb-Rowley United. On June 17, 1962 it became a two screen and renamed the Razorback Twin Drive-In following the closure of the Razorback Drive-In on Roosevelt Road south of downtown. It was operated by Rowley United until 1975 followed by United Artists when it was renamed the Big Red Twin Drive-In.

United Artists closed the drive-in in the early-1980’s. It has since been demolished and offices and retail are on the site of the former drive-in.

When looking at the 1956 aerial the entrance was on Rebsaman Park Road.

Who was the artist that painted the Hog logo on the screens? I have an idea but I will hold off on making any comments.

Spent most of 1977 in Little Rock while working as a radio personality at the Mighty 1090, KAAY, and at KLAZ-FM. Also worked at Tramps Restaurant and nightclub on Cantrell as a club DJ just after it opened when crowds were lining up to get in.

My stay in LR was fun and featured seeing the 1977 version of King Kong at the Razorback Drive-in. I remember the place being very large by drive-in standards, and packed to capacity. I also remember seeing that year’s James Bond movie, The Spy Who Loved Me, at a 1940’s style neighborhood theater just a few blocks North of Cantrell, but I cannot remember the name of the theater.

My time in Little Rock was all about the moments I was lucky to have enjoyed behind the mic at KAAY. Growing up in New Orleans, I often listened to the station and wanted to work there badly as it was only one of a handful of 50,000 watt AM clear channel stations that played Top 40; that was a big deal back then.

I remember my night at the Razorback like it was last weekend. Fortunately, we still have a few great drive-ins remaining here in Los Angeles. And yes, I still occasionally take my family to the drive-in.

Frank, the theatre you saw “The Spy Who Loved Me” at was the Heights on Kavanaugh just north of Cantrell.

The original Razorback Drive-In was on Barber Street, where Booker Magnet Elementary School is now. This one replaced it in the early 1960’s.

This opened on June 12th, 1953 by Robb and Rowley as the Riverside Drive-in and closed down at the end of the 1961 season. It reopened as the Razorback Twin Drive-In with the screens called Big Red (West) and Wild Hog (East) on June 17th, 1962. Both grand opening ads in the photo section.

The site breaks the comment, so you’ll have to change the ‘Crest Theatre’ to an ‘@’ symbol, followed by 34.

The May 7, 1962 issue of Boxoffice did its best to clear up the confusion:

Construction is under way of a new twin drive-in theatre in Little Rock, Ark., by the Arkansas Amusement Co. (Rowley United). The theatre is build on Cantrell Road at the site of the present Riverside Drive-In which was closed for the winter.

Opened with a colour cartoon(not named), “Lost in Alaska”, and “the lawless breed”.