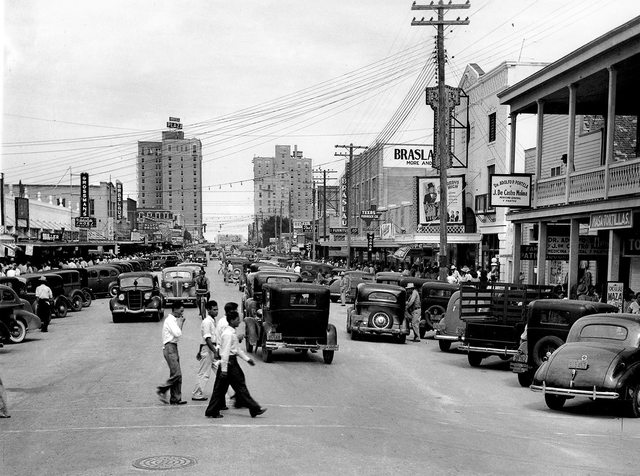 The Grande Theatre was built in 1928 by Bruce Collins, owner of several other Corpus Christi movie houses. It was directly across Leopard Street from the Melba Theatre. It opened on November 25, 1928. In the 1930’s, it was being operated by the Robb & Rowley circuit.

Originally built with a simplified Spanish Colonial Revival front, it was later given an Art Moderne façade. It was closed in 1960. In 1961, the Grande Theatre was converted to retail use, becoming part of the adjacent Braslau Furniture Co. store.

As of 2011, the building was vacant. In 2012, the entire block was bought by Nueces County’s Regional Transportation Authority and it was demolished.

The Corpus Christi Public Library has a few photos of the Grande Theatre.

This view is from October 3, 1940. Like the Melba across the street, the Grande probably ran Spanish language movies at least part of the time.

This photo was made in 1961, after the theater had closed but before the building was incorporated into the Breslau Furniture store. The Moderne front looks like it dates from the 1940s or maybe the early 1950s.

The Grande Theatre has been demolished and construction has begun on the site for the new headquarters of the Nueces County Regional Transportation Authority. The Melba Theatre across the street has also been demolished, but for private redevelopment for which plans are indefinite.