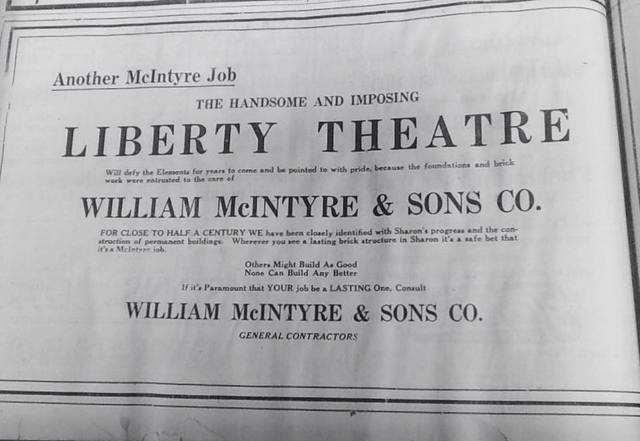 The Liberty Theater opened in April of 1921. The theater was designed by the Pittsburgh architectural firm of Simons, Brittain, & English. Listed in the 1955 Film Daily Yearbook with 1,207 seats. Not listed in 1957, it was demolished in 1959.

The building is currently occupied by the Shenango Valley Civic Center which is a banquet facility.

Ken Ridgewood is incorrect. The building he is showing is the old Sharon Civic Center and has nothing to do with the old Liberty Movie Theatre. The Liberty Theatre was across the street from the building shown and currently is a two story building occupied by Hunter, Heiges and Gross, which is an architectural firm. Sorry, Ken, I don’t know where you got your wrong information.

Here’s something rather odd. The April 24, 1920, issue of The American Contractor had a notice about a theater to be built in Sharon, and all the particulars- architects, builder, owner- were the same as the Liberty as described in the Billboard item Ken cited, but the location was given as State Street and Porter Street, which is roughly the location of the Columbia Theatre:

I don’t know if the magazine made a mistake about the location, or if Mr. Gable lost the location to the rival company that later built the Columbia, and had to find another location for the Liberty project.

I suspect that the Orpheum was the house originally called the Thomas Theatre. The Orpheum’s long address in the “Theatres” listings of the 1919 Sharon directory overlaps the address we have for the Thomas. I’ve been unable to find references to the house under either name later than 1919.

The 1919 Sharon directory has the Gable Theatre listed in the alphabetical section (at 58 S. Railroad Avenue), but not in the list of theaters. It also has the Thomas Theatre listed only in the alphabetical section. The only houses on the theater list are the Alpha, Family, Luna, Morgan Grand, and Orpheum, and the Orpheum’s address covers the street number given for the Thomas.

“The Strand, Sharon, Pa. which opened with vaudeville April 20 closed May 7.

“The house plays five sets twice weekly, hooked by Billy Delaney, of the Keith office. Business has been light since the newest change of policy with the early closing following.”Note that the proposed theater in the April, 1920, magazine article I quoted in a comment yesterday says that the new theater was to be built for the Strand Amusement Company, the same company that owned the Liberty, as noted in the Billboard item cited in the very first comment in this thread. One company building two large theaters in the same small city at the same time doesn’t make sense, so the Strand and the Liberty had to have been the same house. Variety must have confused the name of the operating company for the name of the theater itself, while The Billboard got it right.