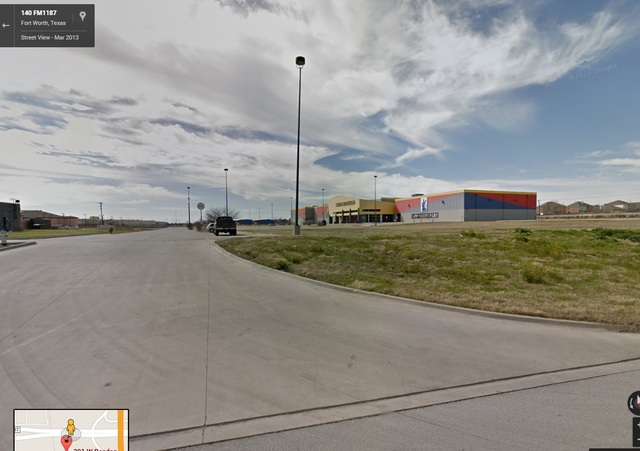 The Rand South Freeway Cinema 8 was opened by the Rand Theatres chain on July 14, 1989 with an official opening on November 17, 1989. According to the Fort Worth Star-Telegram, Trans-Texas Amusement operated a Movies 8 in Burleson in 1992. It became the Hollywood Theaters South Freeway 8.

The Star-Telegram noted in 1996 that that Hollywood Theaters was expanding the South Freeway 8 to 10 screens and adding stadium seating. In 1998 the number of screens was increased to 14 and became known as the South Freeway 14. It was taken over by Regal on April 1, 2013.

In the 1940’s, there was the Dixie theatre. Anyone have pictures or information?

I was the GM of the Trans-Texas FT Worth Town Center Dollar Cinema 8 in 1992 just up South Freeway from here. I can confirm that this used to be the Trans-Texas Burleson 6 or 8. Before 1992 it had been owned by General Cinema. You can clearly see from the outside where the theater has been added to over the years. I used to call employees into movies here. And it was notorious for being able to hear the trains pass by in the auditoriums. Like me, the GM at the time had been a former GCC manager.

This is now an AMC Theatre.

Also — you sure it was ever actually a GCC? I have an internal list from GCC showing just about every modern theatre they operated and this is not on there.

The Burleson 8 Cinema was opened by Rand Theatres on July 14, 1989 with “Batman” and others.

and reopened as South Freeway Cinema 8 on November 3rd, 1989. Grand opening ad in the photo section.

The not-so-imaginatively-titled Rand South Freeway Cinema 8 had an opening set in the summer of 1989 to coincide with the blockbuster “Batman” film. But that moment came and went. That’s not too unusual as delays happen in construction but when the South Freeway 8 did launch for Little Rock-based Rand Theatres Circuit on September 1st without a phone number, that was odd in 1989. It turned out it was because Rand Theatres was performing creative accounting and not paying for much of anything including taxes, Hollywood studios, newspapers, utilities…. well you get the picture.

The South Freeway 8 was the last theatre to actually open for the Circuit which was furiously trying to mount many other theaters in Texas, New Mexico, Illinois, Florida and Tennessee. The theatre did get phone service but Hollywood studios were wise to the situation. New films dried up fast. Rand’s financial dealings in other states were coming into light and local police raided the theater’s box office and concession stand on October 7, 1989 to grab whatever cash was on hand. Given that the local paper had stopped giving away ads that weekend “on account” and Hollywood no longer providing first run product to the venue, It’s likely that amount was so embarrassing low that the staff were said to have offered free concessions to augment the kitty. Raids occurred at all of Rand’s area theatres. And with that, the DFW market was Rand-less and the South Freeway 8 had closed after just five weeks.

Rand was able to keep the charade going in New Mexico because news didn’t travel quite so fast pre Internet. The New Mexico Tramway Rand was reaching the finish line with a November 17, 1989 announced Grand Opening. But on November 12, 1989, local officials stepped in and the Rand Circuit began a quick descent ending with foreclosure auctions and landing Tony Rand in prison.

The Burleson cinema re-emerged just a month later with a November 3, 1989 soft launch and November 17, 1989 re-grand opening. It continued under various operators all the way to the 2020s when AMC was operating it as the Burleson 14..