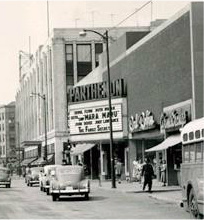 The Parthenon Theatre was opened on March 14, 1921, originally seating over 2,500, it was the second-largest of Hammond’s movie theatres, after the 3,000-plus seat State Theatre. It was originally operated as part of the Warner Brothers circuit, one of their earliest houses outside of California.

Opening night’s program featured 5-acts of vaudeville from the Orpheum Circuit, a couple of film shorts, and the Douglas Fairbanks feature “The Nut”.

The luxurious and highly ornate neo-Italian Renaissance/Baroque style Parthenon Theatre quickly gained the nickname of “The Wonder Theatre”, not only screening the best first-run features with sound by 1927, but vaudeville into the 1930’s, many of the most famous big bands of the 1930’s and 1940’s, and celebrities such as Harry Houdini, Jack Benny and even Rin-Tin-Tin, the most famous canine star of Hollywood until Lassie.

The Parthenon Theatre’s spacious auditorium featured one of the earliest Hammond movie houses with unobstructed sight lines, thanks to its large reinforced steel and concrete balcony, which seated well over 1,200 alone. It was equipped with a Kimball 2 manual 11 ranks organ. Its lobby spaces could fit more than 1,000 patrons, and all the Parthenon Theatre’s public areas were richly decorated, like a Renaissance era princely palace, and furnished with the finest artwork and furniture, including caged songbirds in the main lobby.

After closing in the early-1980’s, the longest-lasting of downtown Hammond’s great movie palaces was sadly demolished in 1983, and the site has remained an empty plot of land.

It’s not even a parking lot. It’s a useless grassy area right next to the downtown Hammond overpass.

Several vintage photos of the Parthenon Theatre can be seen on this web page. The text on the page is mostly quoted from Cinema Treasures, so there’s no new information available.

You can still visit The Parthenon Theater in Hammond, Indiana by visiting: www.hhs59.com/parthenon.htm

Click on the movie poster of Cary Grant and you will go inside to watch a movie clip. Pretty clever, eh?

If you have any stories, pictures, etc. to add to this array of Hammond movie houses, please share them with us.

Rapp & Rapp did the remodel. Maybe not George & Cornelius by that point in time.

Address should be changed to 5144 S. Hohman Avenue.