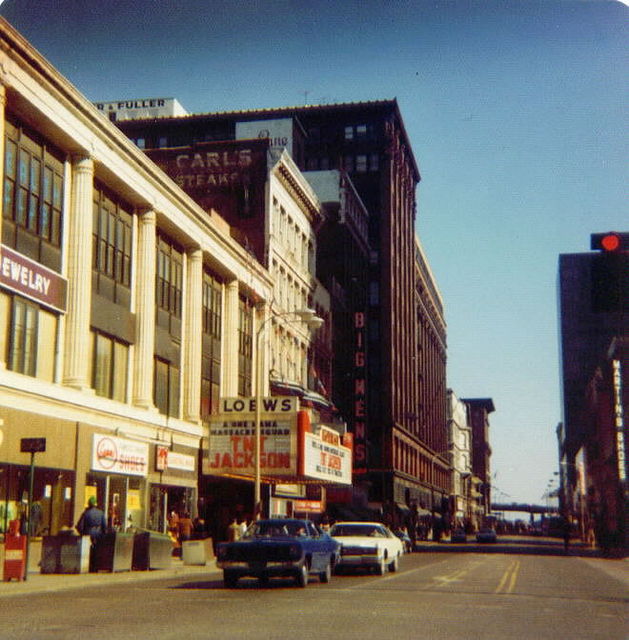 The Loew’s State Theatre may have had the strangest lobby of all Missouri theatres. Although its graceful marble lobby was elegant, it also had an alley in the shape of an L running through its center.

Entering the Loew’s State Theatre for the first time, one would have been surprised to find he couldn’t directly enter the auditorium from the lobby. He had to climb the marble stairs, cross the upper lobby and descend another marble staircase.

The history of the alley doesn’t explain why theatre architect Thomas Lamb or owner Marcus Loew designed the $1.2 million building this way.

It started in the 1850’s with Isaac Walker, who owned this parcel of land. Walker recorded a deed on June 24, 1858, specifying that a 20 foot wide alley should run east and west through his land. Walker owned this property until 1919, when Marcus Loew purchased it to build his palace.

On June 30, 1919, the T.P. Barnett Company, representing Loew, asked for elimination of the alley. To do this, the entire block would have to be rebuilt because the L-shaped alley would allow service entrances for the stores adjoining the theatre building. The city decided the alley belonged to Marcus Loew, and he needn’t enforce Walker’s deed. Loew could eliminate or move the alley if he wanted to, but for some reason, he built the theater around the alley.

The first sight to greet patrons of the Loew’s was the black marble ticket booth. Inside, they would see a contrast to the black marble booth in the white marble, rotunda-shaped lobby. Gilt blaconies overlooked the lobby, and fountains flanked each side. A crystal chandelier overhead illuminated the while marble grand staircase which led to the upper lobby.

The entrance foyer floor slanted upward slightly toward the stairs. This technique in the theatre design draws the patron toward the stairs, which he must ascend, anyway, to reach the auditorium. Upstairs, the lobby was decorated with a mural of a sailing ship and rowboat framed by marble pillars. It gave one the impression of looking out a window and seeing such a scene. The furniture of the upper lobby included sofas, chairs and tables in addition to chandeliers which tended to be egg shaped. The other wall was heavily paneled.

Lamb always used much wood panelling in his architectural designs. The practice was also seen in the panelled Louis XVI salon in the Loew’s Midland Theatre in Kansas City, built two years later. The panelling made the Loew’s theatre elegant - as did the ceilings of the ladies' room, which were covered with quilted satin.

The railings of the theatre’s balcony glowed with polished brass, while most of the ceiling was covered with gold leaf. The central chandelier in the auditorium held over 1,000 crystals. Also noteworthy in the auditorium were large paintings of the Muses framed by Corinthian columns.

Part of the nationwide Loew’s Inc. chain, the State Theatre was built in an unusual site - downtown. The theatre district stood on Grand Avenue as the Great White Way. In an August 22, 1924, interview with the St. Louis Post Dispatch before his theatre’s grand opening, Loew said his downtown choice for a site was controversial. But, he said, he was sure people would come, and they did.

On August 21, 1924, the opening night offered a varied program, including the Loew’s State Symphony, an organ solo, a cartoon, topics of the day, a featured presentation (“Revelation”, starring Viola Dana and Monte Blue), in addition to personal appearances by 16 celebrities. The last event included the organ solo by Tom Terry, who played “Pomp And Circumstance”.

The opening week program summed up the policy of the Loew’s State Theatre, which was described as follows, “The superior construction of this theatre offers the combined advantage of the utmost in comport and convenience for our patrons and the most complete facilities for the ultra-modern presentation of pictures and the allied arts”.

The Loew’s State Theatre continued to do well for the next half century. On August 10, 1974, the theatre celebrated its 50th anniversary. Patterned after the theatre in New York, the Loew’s has a twin in New Orleans, also called the State Theatre.

The St. Louis Loew’s State Theatre had a personality of its own. A parrot and a macaw lived in the lobby and greeted patrons. They stayed there for over ten years until someone taught the parrot unsavory language. A fish pond stood in the lower lobby with minnows in it. One minnow reportedly got a peanut stuck in its mouth and nearly drowned, until Officer Frank Schlueter pulled out the peanut with a bobby pin. This even made newspaper headlines.

After 53 years, the Loew’s State Theatre closed its doors a final time. The theatre, in its later years, had changed its movies from first run to second run and ethnic films. The Loew’s State Theatre didn’t even publicize its Sunday, August 28, 1977 closing, most people there who were watching the movie didn’t know this was its final day. The last movie to show there was appropriately named “Autopsy”(aka “The Magician”) starring Sue Lyon.

In May 1983, the Loew’s State Theatre was slated for demolition, and on Monday, May 16, the wrecking ball did away with the auditorium. The lobby on the other side of the alley remained until the entire block was demolished making way for the Americas Center (The Convention Center). Before the wrecking ball hit, almost everything of value had been removed, including the marble walls, seats, and chandeliers.

Stephen, Thank you so much for posting this dedication to your Dad, and I am saddened to hear of “OUR” loss. I feel so fortunate to have had but a glimpse into our shared memories of the relationship between your Dad (as a high school student), working alongside my Mother, at the Loew’s State in St. Louis. Sadly, and selfishly, I hesitated too long to respond to his last email. We were both driven to tears – happy tears, yet grieving tears – of treasured moments. I had often thought of continuing our emails, but just could not bring myself to possibly cause another person’s sadness – if that was the case. Please know that my deepest sympathy is sent with this missive – to you and your brothers – and I will always remember you Dad, for bringing back such warm and heartfelt memories of better days. You, me, and this entire community has been so blessed by the service of your Dad’s “hobby.” May he rest in peace. Mahalo and Aloha. Tom

Stephen, I echo the thoughts of TJ on your father’s passing. I have been fascinated with theaters since the late ‘60s, particularly with those in my hometown of St Louis, and your father filled in many of the holes of my research over the years through his comments and pictures. He will be missed.

Stephen: Your recent post brought tears to my eyes and when I read…“An eternal Aloha to Patsy from dad” I wiped away a tear. I will truly miss my “Hawaii Guy”. God Bless you and your family.

WOW! So very sorry to hear about your loss. I’ll make no bones about it – your dad and I (and many of us) had our battles here on Cinema Treasures regarding historical accuracy and whatnot. But one thing can’t be denied: his love and passion for cinema and movie theatres – particularly the ones in the great city of St. Louis – was real.

R.I.P. Mr. Van Bibber. May God comfort your family during this time of grief.

Stephen, I would also like to extend my prayers and sympathy to you and your family. Although I never met your father in person, I knew of him and our mutual love of movie theaters (especially in St. Louis) from this and other websites we posted on (Cinematour.com, drive-ins.com, etc). As my good friend Chris Utley said, your father had true passion for movies and movie theaters, especially in our hometown of St. Louis. God Bless you during this difficult time.

Judy Garland starred in the story of the Smith family, who lived at 5135 Kensington Avenue on the eve of the 1904 World’s Fair. The movie includes classic songs such as “The Trolley Song” and “Have Yourself a Merry Little Christmas.” It was nominated for four Academy Awards, including best song for “The Trolley Song.”

August 21st, 1924 grand opening ad in photo section. It started with a street parade from Union station to the State theatre.

“Meet Me in St. Louis” has one of the most unforgettable depictions of Halloween Night ever filmed. View here