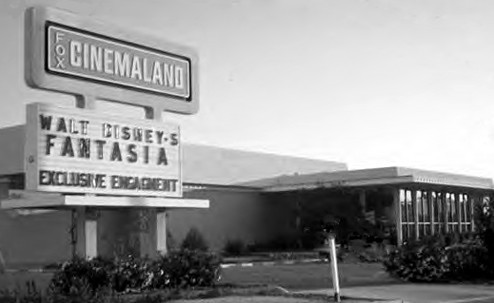 The single screen Fox Cinemaland opened on April 10, 1968 with Julie Christie in “Far from the Madding Crowd”. It was triplexed on December 25, 1974. This theater was located about a block from the main entrance to Disneyland.

The Fox Cinemaland was designed by L. Perry Pearson and Paul Wuesthoff of Pearson & Wuesthoff, a Los Angeles firm soon to become Pearson, Wuesthoff, & Skinner. The April 15, 1968, issue of Boxoffice confirmed that the house had formally opened on April 10.

The architectural firm that designed the Cinemaland apparently designed most of NGC’s projects in the west and southwest from the mid-1960s into the 1970s. I’ve tracked down the names of almost ten of these projects so far, and expect to find more.

I think this theater is in this photograph – View link

I visited this theater once a long time ago, and the location in the photo seems right.

Spud Girl, the theatre is on the other side of the park. The Disneyland Hotel is in the forground of the picture.

Some photos (vintage and contemporary) and newspaper ads of this theater can be found here.

Thanks for the link Micheal,love the ad for Cashiers,Candy Girls and Doorman.

Great memories. As a kid I used to go there and watch Kung fu films.

The location of this theater is (was) at the corner of Harbor Blvd and W. Manchester Ave (which, past the theater’s location, curves into a parallel road – and becomes Sl Manchester Ave. – along the 5 Freeway). As noted earlier, it is not directly across Harbor Blvd from the Disneyland entrance; rather it is directly opposite the Tomorrowland Train Station in Disneyland (next to the Innoventions Building and the Autopia). On the site today stands a Mimi’s Cafe (although the theater’s actual footprint is part of the current restaurant’s parking lot – the restaurant’s address is 1400 S. Harbor Blvd, interestingly). It is directly across from the Howard Johnson Anaheim Hotel & Water Playground.

The Cinemaland theatre opened with “Far from the Madding Crowd” on April 10th, 1968 and closed on June 5th, 1979. It was split up into three screens on December 25th, 1974. Grand opening ad posted.

Came across a 1971 ad for “The French Connection” listing Cinemaland as a featured theater (added to photo section).

I’m an O.C. native and can’t say I remember this theater across from Disneyland in the ‘70s.

Looked like a grand single-screen palace back in the day, before the split, similar to Edwards Cinema in Costa Mesa & Big Newport in Newport Beach.

Even with the split, kind of odd it only lasted a decade, especially with its prime location across from the region’s biggest tourist attraction.