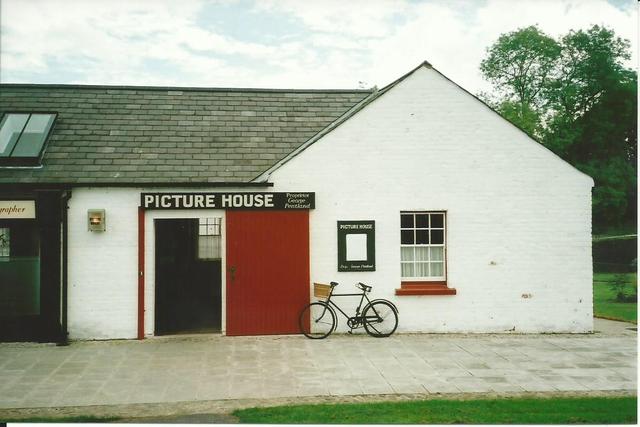 The Picture House is a heritage building that has been relocated to the Ulster Folk & Transport Museum situated to the east of Belfast. The building was originally from the linen mill village of Gilford, County Down. A conversion of a hay loft and store, the Picture House operated from 1909 to late-1931. The proprietor was George Henry Pentland, a tailor who ran the cinema as a successful business side line and as a shared family enterprise. He operated the film projector while his wife, Ida, accompanied the films on the piano. Their two children also helped out by collecting admissions and serving refreshments (tea and buns). Two entrances, at different prices, were available; those who could afford to pay more sat on the comfortable seats at the back of the auditorium. There was no screen as such and films were shown directly onto the whitewashed back wall. On cold evenings stoneware hot water bottles were available for hire. For several decades the Picture House provided popular entertainment to Gilford and its immediate locality. Its clientele were mostly local mill workers. At the height of its success shows were held six nights a week with a matinee for the children on Saturday. Films were hired from cinemas in Banbridge and Portadown. The film reels were brought to Gilford on the local bus and were collected by Mr Pentland. If he missed the delivery he would have to cycle to the town to collect them.

The advent of talking pictures in 1929 saw the closure of many silent cinemas which could not afford to install the expensive equipment required for the new modern style of moving picture. However the Picture House building in Gilford was occasionally used for entertainment including films up to the 1950’s. (Information from the Museum website. My photographs were taken in September 2008, when a loop of silent comedies starring Charlie Chaplin - “The Adventurer”, “The Vagabond”, “One A.M.” and “The Pawnshop” - was being screened.)