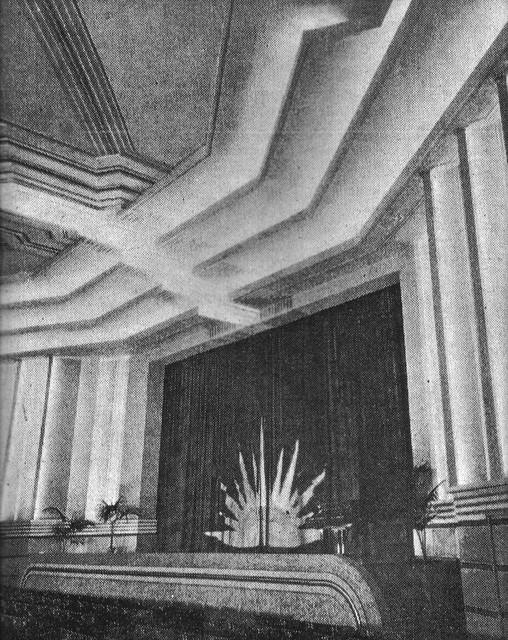 Stanmore is a suburb in Sydney’s Inner West, about 4 miles from center city.
Suburbs here tend to be small, rubbing shoulders with their larger neighbours but having one good theatre, sometimes two.

The Stanmore Theatre began showing films in the 1920’s before getting a facelift from A.J. Beszant’s Broadway Theatres chain in 1936. It had the same looks as the nearby Petersham Odeon, courtesy of architects Kaberry and Chard.

Due to a lack of other venues it was also a local meeting place used for political meetings and wedding celebrations. Greater Union’s ACME theatres division took over in 1943.

In 1953 the name was changed to Odeon and an Art Deco style makeover gave it a new widescreen interior. Theatre historian Paul Brennan tells us that the Odeon and the Empire Theatre in Botany which had identical auditoriums, were give identical plasterwork from Butler’s Interiors who had done the Petersham and Darlinghurst Odeon’s.

The Stanmore Odeon closed on 31st December 1959. It was demolished and replaced by a gas station.

Another nearby theatre is the Olympia De Luxe in Annandale.

How about the twin cinema that was at Stanmore on Parramatta Rd between Northumberland Ave and Percival Rd? I think it was called teh Stanmore Twin, and before that was the Z Twin Cinema. When the Broadway shopping centre opened with the new Hoyts multiplex in about 1999 or 2000, Stanmore couldn’t keep up. Audiences evaporated overnight, it closed and was demolished soon after. A shame, as it was a good place with a cafe and bar, and a multi-ticket deal.

The gas station is 7Eleven.