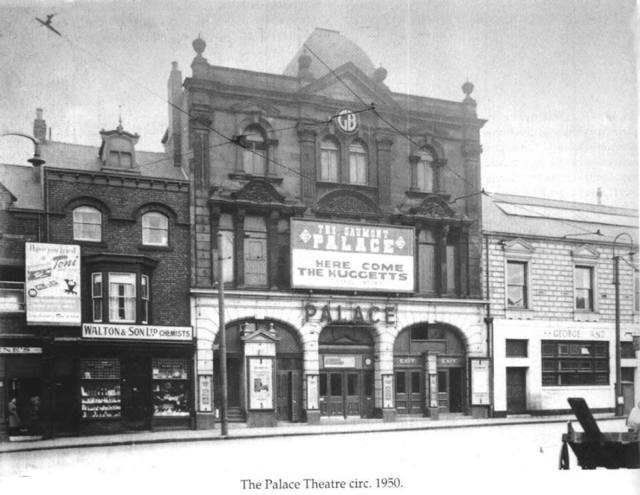 Located diagonally across the street from the Sunderland Empire Theatre, and around the corner from the King’s Theatre. The Palace Theatre was opened in 1891, and was part of the Livermore Brothers chain. It was designed by architect Thomas Angelo Moore of the architectural firm Moore & Sons. In 1903 alterations were carried out to the plans of architects Thomas Ridley Milburn & William Milburn. In 1906 it was taken over by Rosen & Bliss, and Charlie Chaplin made an appearance in “The Mumming Birds” that year. The Palace Theatre was closed as a live theatre in 1909, unable to compete with the new Sunderland Empire Theatre.

Following alterations to the plans of architects Henry Gibson & Pascal Joseph Stienlet, it re-opened as the People’s Palace later in 1909 showing Hamilton’s Flickerless Pictures and varieties. Further alterations were carried out to the plans of the Milburn’s in 1924. The Palace Theatre was taken over by General Theatre Corporation in March 1928, and in May 1928 they were taken over by the Gaumont British Theatres chain. In July 1930 it was equipped with a RCA sound system, and the first talkie programme to be screened here was Norma Shearer in “Their Own Desire” and William Haynes in “Navy Blues”.

The Palace Theatre was closed by Circuit Management Association(CMA) (a precursor of the Rank Organisation), on 1st December 1956 with Tyrone Power in “The Eddie Duchin Story”. The building was unused until it was sold in December 1958. It was taken over by the Council in 1965, and leased to operators who operated a model car racing track in the foyer and part of the circle. From 1970, the foyer was used as an amusement arcade, but this was a short lived venture.

The Palace Theatre was demolished in October 1973, and the Crowtree Leisure Centre was built on the site, which also incorporates the site of the King’s Theatre.