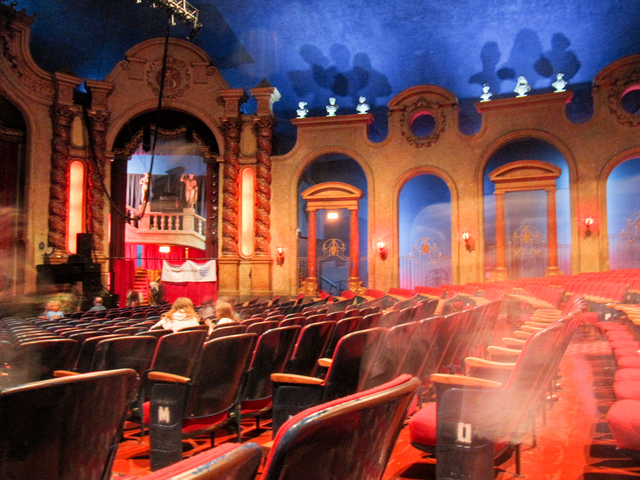 The Gateway Theatre was one of the larger neighborhood theatres built for the Balaban & Katz chain in Chicago, located in the Jefferson Park neighborhood on Lawrence Avenue at Laramie Avenue. The theatre was opened on June 27, 1930, designed in Atmospheric style with classical Roman-inspired flourishes; complete with a dark blue, starlit sky in the 2,092-seat auditorium, and classical statuary and vines on the side walls. It was one of only a very few Atmospheric style theaters by the firm of Rapp & Rapp, and one of the later of their numerous theatres for Balaban & Katz.

The Gateway Theatre was built for movies, though it did have a small stage. It remained a very popular theatre for decades, managing to have packed houses through the 1970’s.

In 1985, the Copernicus Foundation, a Polish-American society serving Chicago’s huge Polish community, acquired the Gateway Theatre from Plitt Theatres, and the interior was restored to its original splendor. As part of the restoration, the foundation added the now-distinctive Solidarity Tower, a smaller reconstruction of a now-demolished clock tower once a feature of Warsaw’s Royal Castle, visible from the nearby Kennedy Expressway.

Today, the Copernicus Center is host to community gatherings and concerts, most notably, the popular Taste of Polonia Fair. It is also used for a while for special film screenings, but these have now ended. The main auditorium is named the Mitchell P. Kobilenski Theater.

jackasses don’t even have an ordinary water fountain anymore

That’s because they can’t make any money off of it – so out it goes!

Pay toilets are next!

If the Copernicus Foundation is planning a NEW theater for the site next to the Gateway, that means the land underneath the Gateway could become “ample free parking” for the new theater…

They put a new screen up. Finally!!!!

This place still does concert. Earlier this year I say Tributosauras Plays Queen and it was a good show. The theater appeared to be in great shape.

I ended my 2016 concert year exactly the way I began it—with a Tributosauras concert.

This was the second of two atmospheric theaters by Rapp and Rapp. The other was the Paramount in Toledo, Ohio now demolished