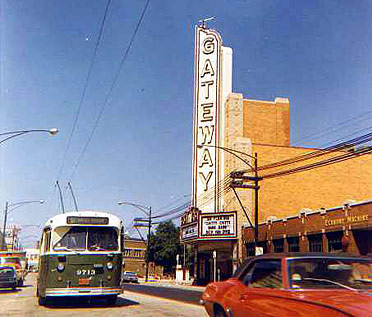 CHICAGO, IL – An annual film series that should not be missed is the Silent Summer Film Festival at the Gateway Theatre, Milwaukee at Lawrence, in Chicago. This Silent Film Society of Chicago presentation continues Friday, Aug. 6, through Friday, Aug. 27. Don’t miss this opportunity to see how historic cinemas were used in their halcyon days!

Remaining dates in this year’s Silent Summer Film Festival schedule include the following programs. All shows begin at 8 p.m.

(Popcorn, snacks and a variety of beverages is available at a modest price from the friendly GATEWAY candy counter.)

Designed by the Chicago architecture firm of C.W. and George L. Rapp, the 1930, 2,045-seat GATEWAY THEATRE, 5216 W. Lawrence Ave., is the second to last major cinema building built here for the tremendously successful local corporation of Balaban & Katz. And, it is the only remaining “atmospheric” theatre (a simulated outdoor-courtyard auditorium with stars and clouds above) from architects Rapp & Rapp.

“The unusual interior detail of the GATEWAY’s open-arcade side arches was used some three years earlier by architect John Eberson in his PARADISE, Chicago. Rapp and Rapp copied the detail here and in the firm’s SOUTHTOWN THEATRE (1931), Chicago,” according to Marquee magazine of Theatre Historical Society of America, Elmhurst, Ill. The GATEWAY shares a design heritage with the CENTRAL PARK, RIVIERA, TIVOLI, CHICAGO, UPTOWN and SOUTHTOWN theatres, all of which were designed by Rapp and Rapp for Balaban & Katz.

Today the building serves the Chicago Polish community as the Copernicus Cultural and Civic Center and as venue to many special bookings, such as film festivals. The building’s clock tower and facade, added 1980-5, is said to be a one-quarter interpretation of the royal castle in Warsaw, which was rebuilt following its destruction in World War II.

The Silent Summer Film Festival is partially supported by a Community Arts Assistance Program grant from the City of Chicago Department of Cultural Affairs and the Illinois Arts Council, a state agency.

For more info about the films, the venue and the not-for-profit society, please view the Silent Film Chicago website

Or, call (773) 205-SFSC to leave a message for Silent Film Society of Chicago volunteers.