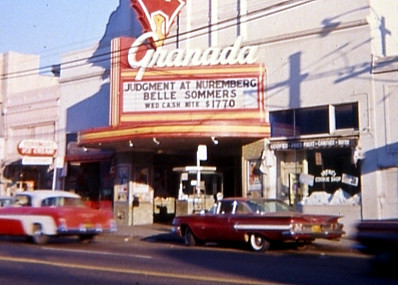 This theater, which opened in 1921 as the Excelsior Theatre, was located in the Mission Terrace/Excelsior District.

Here are some additional photos, from the same source:

The Granada theatre was a nice theatre. It had a double bill, all seat 50 cent policy for quite sometime during the seventies. It continued to show movies in the early eighties. It closed briefly, then reopened showing Filopino movies. During the Filopino movie run, the manager was shot and killed in the theatre lobby right in front of the concession stand. When the theatre finally closed, it was converted to a Consumers Distributing Store (remember that?) the marquee and vertical was removed. The curtain on the stage was removed in the late 60’s when where was a water leak and the curtain was damaged and could not be repaired.

ken mc you mixed the pictures of both Granada Theatres together.

Sorry about that. There is now a Goodwill store on the first floor, so retail would be the appropriate function.

This theater was designed for the Excelsior Amusement Company by architect G. Albert Lansburgh. It was mentioned in several issues of Building and Engineering News in 1921.

The art moderne tower and other alterations to this theater in 1931 were the work of architect Frederick H. Meyer. The Architect and Engineer announced the planned $50,000 modernization project in its issue of March, 1931.

The problem is that there were two architects named Frederick H. Meyer practicing in San Francisco from about 1900 to 1960, and I’ve been unable to discover if the Granada remodeling was the work of Frederick Herman Meyer or Frederick Heinrich Meyer.

Granada had that old light bulb vertical that really stood out at night. Just before the theatre closed, I recall the vertical was re-bulbed and the Granada glowed out in the night, the only thing you could see in that area of the city. Wish I had taken a photo as it was magnificent. BTW, there were downtown theatres that weren’t as elegant as the Excelsior District’s Granada.