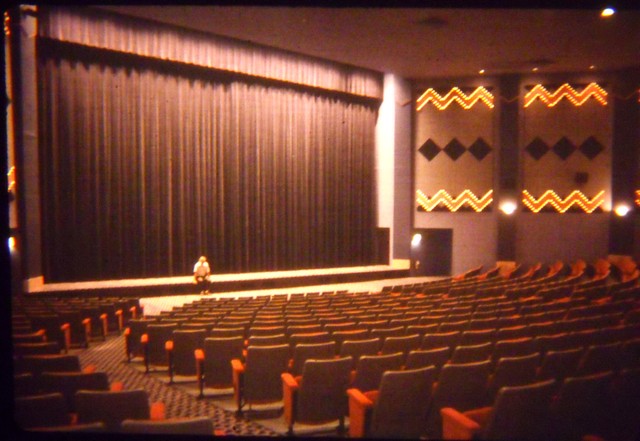 The McClurg Court Cinemas, which was last operated by the Loews Cineplex chain, was not by any stretch of the imagination anything architecturally stunning, or even very visually interesting.

It opened November 10, 1971, and its exterior appearance still evokes that era pretty clearly, though the interior has been modernized more than once since then. For its first couple years in operation, it was a reserved seating-only roadshow house. In Fall of 1987, the large 1,189 seat auditorium was triplexed, creating one large main screen, and two much smaller screens (carved out of the balcony space).

The McClurg Court’s Auditorium #1 was for years the best place in all Chicago to see a major blockbuster, special effects packed epics such as “Titanic” or “The Matrix”, when lines would snake down Ohio Street. It had clear fields of vision, THX sound, and a 70 mm equipped projection system.

The two smaller screens were not as impressive, but did have stadium-style seating, wide aisles and DTS sound. When a major studio film, especially an action or sci-fi spectacular, premiered in Chicago, from the mid-1970’s through the 1990’s, this was most often where it took place.

However, since the opening of AMC’s 21-screen River East megaplex just down the block in 2002, attendance at the aging triplex began to fall off (though it had already been to some extent for some time). It was during the summer of 2003 that Loews Cineplex made the sad announcement it would be closing the McClurg on September 11th (though it actually ended up shuttering it August 28th instead). With its closing, a chapter in Chicago’s cinema history ended, since the McClurg Court was in many ways the last movie palace screening first-run films still in operation.

For many Chicagoans who were too young to attend the old movie palaces that had closed before they were born, like the Granada, Uptown or Southtown, the McClurg, though not remotely as huge or ornate as the old time palaces, walking into the original auditorium with its massive screen and 1,000+ seats, especially when it was packed and there was an excited buzz in the room just before a long-awaited summer blockbuster was about to begin playing, was an experience I personally will always remember fondly.

With “The Master” getting 70mm prints, and Chicago not being one of them (to my knowledge), this theater is all the more missed.

Does anyone know what the construction crews doing to the space?

It’s interesting that in his post of Sep. 7, 2009 Cinemark Fan said, “I assume that the screens at 600 North Michigan might be gone by this time (I may be wrong though) And if that’s the case, the seating capacity at the River East alone won’t be enough to handle the volume of people who go see movies.”

Fortunately that hasn’t happened as AMC just completed some renovatios to the 600 North.

McClurg exterior in May 1999 at 0:29 & 1:10 through the end in the below clip courtesy of alex35mm, who posted it to the Old Orchard Theater page for it’s appearance as well.

I used to work across the aisle from that guy in the Darth Maul costume seen at 2:33. He was quite proud of it. Had Star Wars stuff all over his work area. Wonder what ever happened to him.

This opened on November 10th, 1971. Its grand opening ad can be found in the photo section.

I saw Oliver Stone’s Born On The Fourth Of July at McClurg Court the first week of January 1990 in 70mm. The THX logo blew me away. It was the THX Cimaron trailer. Seeing this film, this epic film in 70mm at this theater left such an impression on me that I never forgot it. I went back for Gettysberg in 93, True Lies in the Summer of 94, the restored 70mm presentation of Vertigo in 96, and The Thin Red Line. Miss that theater so much.

Does anyone have anymore photos of the interior of theater one? Would love to see more photos of it, also the corridor, I seem to remember the THX logo outside the entrance as well as a diagram of what THX and the theater is.

I remember seeing Titanic there. Didn’t appreciate the theater at the time.