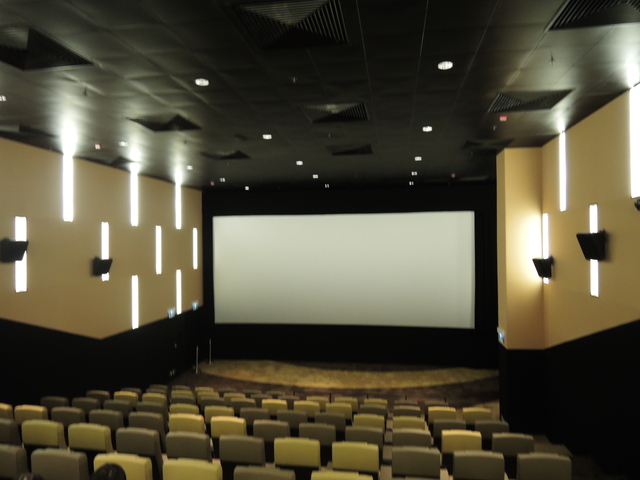 The 1,131-seat, nine-screen state-of-the-art Multiplex@Kowloon Bay is on the ground floor of E-Max of the Kowloon Bay International Trade and Exhibition Centre. The site of the cinema was previously a bowling alley. The cinema opened to business on 14th February, 2014 with “Winter’s Tale”, “American Hustle”, “Endless Love”, “Robo Cop”, “The Wolf of Wall Street” and “The Lego Movie”. House 1, House 2, House 3, House 4, House 5 and House 6 are ordinary stadium-seating cinemas, while House 7, House 8 and House 9 are VIP cinemas with VIP Lounge, theatre dine-in service with the chef’s choice and luxurious lounge chair seating as advertised in its web page. All houses are equipped with 4k digital projectors and equipped with Dolby Surround 7.1 sound system, while House 1, House 3, House 7, House 8 and House 9 also equipped with Dolby Atmos sound system. House 1 has a stage and a private changing room. The cinema is run and managed by Hopewell Holdings Limited.

Would that be Cantonese, Mandarin, etc.? Or, despite the dialects is it all written the same? I know with some of the Scandinavian languages, although the vocabulary is the same, and it sounds the same, words are spelled differently.

Robboehm: Raymond wrote the name in “traditional” Chinese characters, which is widely used only in Hong Kong, Macau, Taiwan, and sometimes Singapore, but not mainland China. In Chinese, written characters and dialects are two different sets, which is not that easy to explain to westerners.

The official opening date of the theatre is on 3rd June 2014 with a Cantonese film.