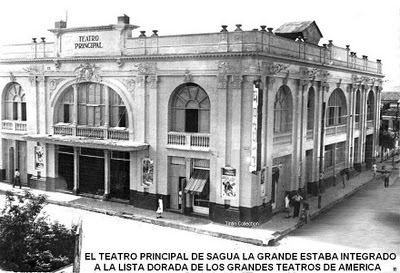 Located in Sagua la Grande in the province of Las Villas. The Teatro Uriarte was opened in 1873. In 1924 it was named by a public contest Teatro Principal. On 11th December 1925 a benefit was held for teacher Don Alejandro Marimon. The building was destroyed by a hurricane in 1933.

It was rebuilt and reopened on 8th April 1935 with Jeanette MacDonald & Maurice Chevalier in “The Merry Widow”. The Cine Principal was still operating in 1959. It was later re-named Cine Sagua.

This theater was renamed “Sagua”, after the Castro’s revolution.

This theater first opened in 1873 as Teatro Uriarte, in baroque style, the property of Don Juan Uriarte, manager and Don Domingo Fabre, the orchestra conductor. Tradition claims it has had amazing acoustics because it was built over an ancient beach well or subterranean cave. It had two beautiful statues of Sappho playing the lyre at the entrance, spider candelabra, an enormous stage with a pit for big orchestras and attractive ample balconies. It was bought by the owners of the famous circus Santos y Artigas and its name changed. In 1922 it was bought by architect Luis Gálvez. The first projectionist was local photographer Pascual Pérez. A benefit was held for octogenarian primary teacher Don Alejandro Miramón Casanovas. During the hurricane of 1933, Pedro “el Gallego” Castany’s wife, whose company was performing at the theater, gave birth to a baby girl.