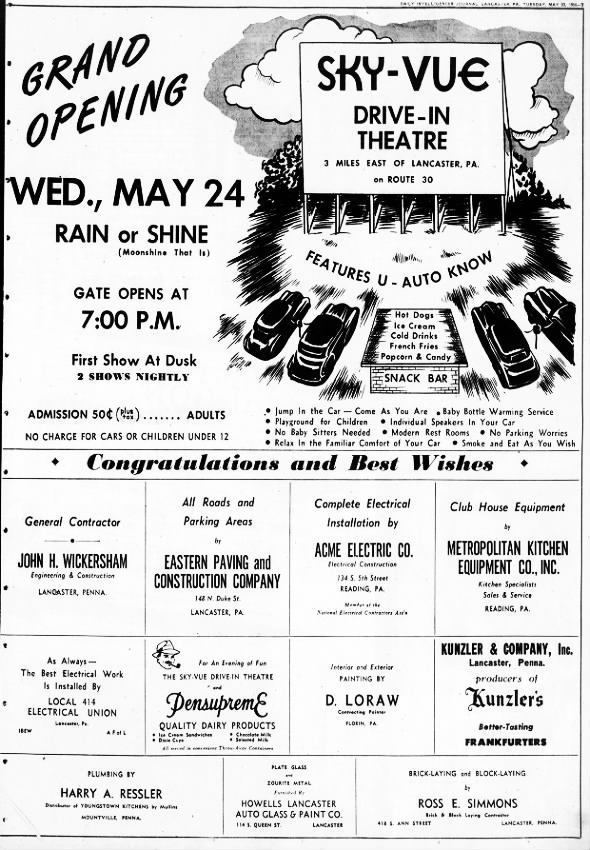 The address for this theater was 2228 Lincoln Hwy E, Lancaster, PA 17602. Stanley K. Tanger is the entrance road.

The Comet closed in 1979, The Sky-Vue in 1982 and The King Theatre closed in 1983….my parents and grandparents were the last to manage them

I do not believe that Angstadt and Wolfe ever operated this drive in. They operated the King Theatre in Lancaster when that was the last theatre owned by the Chertcoff circuit. However, I think both the Sky Vue and Comet drive ins were long closed when that happened. I am going to try and find out somewhere when the Tanger outlet center opened. The drive in closed I believe when the property was sold for the construction of the center. The golf course is part of the Host Resort Hotel located farther east on Route 30. That opened while the drive in was still in operation. In between the drive in and the hotel was a restaurant called Joe Myer’s family restaurant. It was a favorite place to eat with “the locals.” Depending on where you sat in the restaurant you could plainly see the drive in theatre screen as it faced East. If they would have put speakers in the restaurant we would have had the first dinner and a movie location!!!!!!

The Sky Vue Drive in was in operation until at least the mid 1960’s. I remember going there to see the “very adult” movie “The Carpetbaggers” with George Peppard. Periodically the drive in showed first run movies, but most of the time they were either second run or “b movies.” The drive in was located where the Tanger Outlet center is now. The last time I was there, if you drive to the back of the center the light poles were still there that were on either side of the screen. The screen was in the back and was perpendicular to the highway. There was a long driveway from route 30 to the entrance and box office. I remember for the Summer holidays there would have one of those all night 4 or 5 feature shows. The Chertcoff company also operated the Comet Drive In theatre West of Lancaster off of what is now Route 283. That opened after the Sky Vue. The Comet was doomed when they made Route 283 a limited access highway and they had to change the entrance to one of the roads that surrounded the theatre. I remember a new road and bridge were built from Rohrerstown Road to get to the Comet. I am sort of getting off track now. I just wanted to add that this drive in – the Sky Vue – was opened at least until 1964 or 1965 whenever “Carpetbaggers” was released. How long after that time it was still operating I cannot remember.