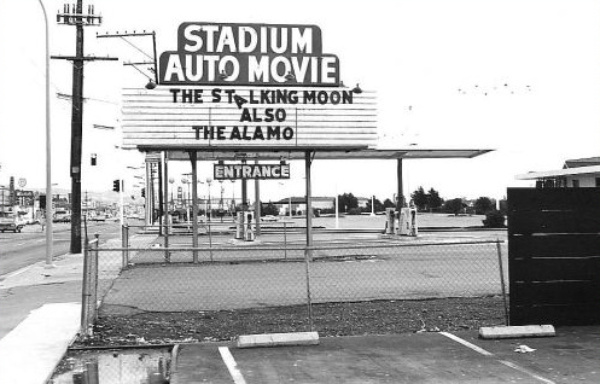 Located off E. 14th Street near the Bayfair Mall, the Stadium Auto Movie was opened February 12, 1948. This drive-in, along with the neighboring Oakland Drive-In was later merged together and closed around 1978. It was was torn down for retail expansion.

… and also the Bayfair bowl. How could I forget? I must have been a serious film buff even then, as I don’t remember ever going to the Oakland Drive-in, but lots of visits to the Stadium Drive-in.

1958 Aerial photos of the Oakland and Stadium Auto Drive-Ins. Which one is which?
View link

Addresses for both Oakland & Stadium Drive-Ins on Driveins.com are incorrect. Approx. address for this drive-in was 15201 E. 14th St. San Leandro, CA 94577.

I stand by the address I gave AS I PASSED BY THIS DRIVE-IN ALMOST EVERY DAY AS A CHILD AND A TEEN!

The entrance was closer to 150th Ave. than 159th Ave. unlike the Oakland which was literally on top of the Bayfair Shopping Center.

The entrance for Oakland was across the street from Tito’s @ 15508 E. 14th St. Though the Stadium WAS next door, the entrance was further north. The marquees next to each other would have been a distraction.

What a great triple feature at the Stadium Drive-In the weekend of 9/18/1970, as reported in the Hayward Daily Review. Herschell Gordon Lewis' gore triumvirate, “Blood Feast,” “Two Thousand Maniacs” and “Color Me Blood Red” were featured. Now that’s a drive-in treat!

Sometime in the 60s one of the concession stands burned down. I can’t remember if it was at the Stadium or the Oakland. Does anyone remember?

This opened on February 12th, 1948. Grand opening ad in the photo section.

At some point, the Oakland and Stadium drive-ins merged. The 1977 Motion Picture Almanac had the first drive-in list to notice, calling it the “U A Stadium Drive In 3”, capacity 1100. But as early as 1972, the United Artists circuit entry in the MPA included the “Stadium/Oakland D.I.” in San Leandro.

The combined entry’s last appearance in the MPA was the 1979 edition, suggesting it closed in 1978 or earlier.