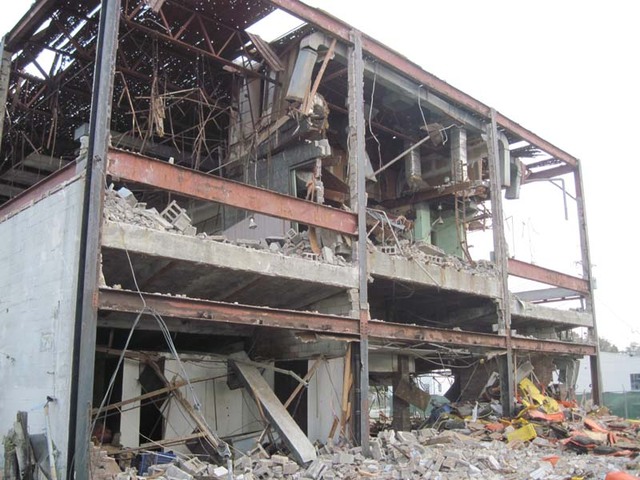 On the east side of the town of Patchougue sat the old Plaza Theatre, which was built in 1962. It became a boarded up relic, hinting back to the simple, single screen flat-top theatres that were a staple of the 1960’s and 1970’s.

In early-1982, it was twinned, and it closed in March 1986. It looked much like many of the old Century and General Cinemas theatres.

The Plaza Theatre was demolished in September 2011.

The entry for architect Maurice Sornik in the 1962 edition of the AIA’s American Architects Directory lists a “Theatre & Comm. Bldg., Patchogue” as a 1959 project. The Plaza doesn’t look like it had any commercial functions, but it’s the only theater listed for Patchogue that was built around that time.

Is there a theater built in Patchogue that was opened in 1959 or 1960, and is missing from the Cinema Treasures database? If not, then it’s possible that the Plaza was the project listed, but it was built without its commercial component.

The Plaza was the only post world war II theatre built in Patchogue Village. It had no commercial functions. Alto originally a single screen it was twinned. It then closed and remained derelect for more than two decades. Despite attempts to repurpose it as a media center it was torn down this year. Of all the theatres that once existed in the village proper or on Sunrise Highway the Patchogue Theatre for the performing Arts is the only one in operation. The Sun Wave Twin is now retail, the Multiplex (and the previous All Weather Drive In originally in the space) and the Granada were demolished, the Rialto burnt down. The original Unique, precursor to the second one which became the Rialto was only demolished in the past two years having served as a retail space. The space occupied by the original Unique and the second Unique (aka Rialto) is now a housing complex.

Come see films now at the PlazaMAC on 20 Terry Street in Patchogue. Check out www.plazamac.org for screenings. A true rebirth of cinema art on the South Shore – the first of any such venue in partnership with the Huntington Cinema Arts Centre on the North Shore.

amending my comment about theatres in Patchogue there was also the Star Palace at the time of the first Unique. But that was long gone before I came on this earth.

And then there’s Irving Berlin (composed “God Bless America”) opened shows in Patchogue that then went to NYC Broadway. Anyone know which theatre that was?

The out-of-town tryout for Irving Berlin’s 1917 musical “Yip! Yip! Yaphank!” was held at the Star Palace Theatre in Patchogue. I don’t know of any other Broadway shows that had tryouts in Patchogue, but there might have been some. Most pre-Broadway tryouts were held in larger cities, with the Shubert Theatre in New Haven being the most popular venue.

I don’t know how the Granada met it’s end, but the Unique, aka The Rialto burned to the ground in the 1970’s and was not used as retail afterwards, the fire was a complete loss.

The Granada was a retail site, still with the sloped floor. The entire block was demolished and is now the site of the courthouse complex.

Added of photo in it’s prime.