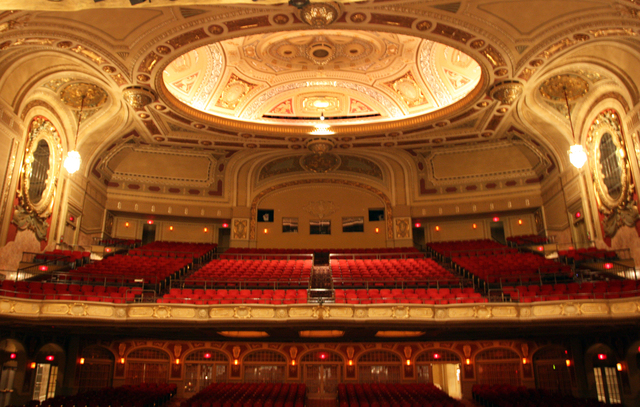 Built for the Rubens Brothers Theatre Company and opened May 24, 1926 with Corrine Griffith in “Mille. Modiste”. The prestigious Chicago-based architectural firm of Rapp & Rapp, known for its Chicago palaces like the Uptown Theatre and Chicago Theatre, was hired to design the largest and most elegant vaudeville theatre built in Illinois outside Chicago at the time.

It was built in the French Renaissance style, but also contains elements of the Neo-Classical and Rococco styles. Besides its very luxurious decor, like the Rotunda modeled after Rome’s Pantheon or its stately Esplanade, or inner lobby, based on Versailles' Hall of Mirrors, the Rialto Square Theatre is still famed for its great Barton Grande Organ, a 1926 original opened by organist Leo Terry and today cared for by the Joliet Area Theatre Organ Enthusiasts.

Though the Rialto Square Theatre closed as a movie theatre in the mid-1970’s, it was rescued from impending demolition by a grass-roots campaign and restored to its former glory in 1980 and reopened the next year as a performing arts center.

I saw many movies in the Rialto. The sheer size and the magnificant decor made every visit an event. Portions of the film Stir of Echoes starring Kevin Bacon were filmed inside the Rialto.

I just learned about this beautiful theatre and that it in located in Joliet Illinois…home of the Drew Peterson trial.

There us a picture (postcard?) of the Rialto Square Theatre in the book Legendary Route 66 (page 135).

This “Jewel of Joliet” has one of the best original Barton Theatre Pipe Organs in the world.The Joliet Area Theatre Organ Enthusiasts maintain it in excellent condition.You can read more about it here:http://www.jatoe.org/organ.htm

Leo Terry Sr was the 1st organist that open the Rialto in Joliet and Leo has his oldest great great grandson who lives in Joliet’s wideside. His name is Don Terry, Don is my son; who may not have the talent Leo had with the keyboard but has a bass baritone tenor voice that makes you feel with harmony

The Rialto Square Theatre is vibrant and management firm VenuWorks continues to draw popular attractions on a regular basis which fill the seats and generate hundreds of thousands of dollars in profits. Financial data indicates that the Rialto Square’s events in March and April cost the Rialto about $235,500 and generated nearly $565,000 in revenue, constituting a profit margin of nearly $330,000. The Joliet City Council provides a $500,000 annual subsidy to the Rialto, and corporate sponsors also contribute. Earlier this year, comedian Bill Engvall drew well, as did the KAR Dance Competition ($35,605) on March 15 and singer Aaron Lewis ($36,539) on March 27. On April 12, the Rainbow National Dance Competition cost the Rialto $13,216 and generated $54,494 in revenue, or a profit of $41,279. Three weddings at the Rialto during March and April generated profits of between $6,000 and $8,000. With big events, the Rialto aims to draw a profit of at least $10,000. The least successful this Spring was The Church Basement Ladies on April 9, which cost the Rialto about $7,000 but generated about $10,800 in actual revenue for a profit of $3,800. Last year the Rialto began a new monthly movie series with $5 general admission seating for weekday screenings. On March 14, the Rialto played Bohemian Rhapsody to a packed house, an incredible success which cost the Rialto about $4,510 but earned actual revenue over $16,560 and a profit of $12,050. On March 21, Billy Idol played to a sellout crowd at the Rialto in a two-man performance with guitarist Steve Stevens. That cost the Rialto $29,180 and generated $56,232 in revenue. The Rialto turned a profit of $27,052. The May 10 “I Left My Heart Tour” performance by Tony Bennett did well. May and June are both busy months for the Rialto.

The lobby has been temporarily repurposed for traffic court hearings.