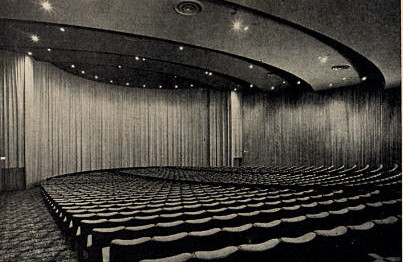 The UA Cinema 150 opened June 19, 1968, in southwest suburban Oak Brook. The opening movie was Glark Gable in “Gone With the Wind”

It was one of the only Chicago-area movie houses to feature the Dimension 150 process. In its earliest days, the Cinema 150 played roadshow films, like “Oliver” (in 1969) to reserved seating.

In December 1972, the theater was twinned, and the Dimension 150 projection equipment and screen were removed. It was also renamed the UA Cinema.

The UA Cinema closed in 1983, and was demolished to make way for the eight-story 1111 W. 22nd Street building designed by Holabird & Root constructed on the site of the theater in 1984.

To DON KINSTALLO, the photo no longer shows up on this site, but I remember when it did. I thought that the photo from the air was taken when the theatre was being built because if I remember right the photo shows the parking lot has not been paved. I don’t remember anything about a fire.
To CHITOWNGUY, if you thought this theatre was “wonderful/elegant” when it was twined, you should have seen it before it was twined. This was a DIMENSION 150 (D-150) theatre (the only other D-150 theatre around Chicago was/is the River Oaks in Calumet City, it is now closed but I hope it will open again). I have always felt that these two theatres were the finest “modern” theatres around. Both theatres were built from the ground up as D-150 theatres. They had huge curved solid sheet screens (Does anyone know how they would compare to a CINERAMA screen), they could show non-scope, scope, 70mm and D-150 movies, the sound was great and the projectionist could control the maskings for all four types of movies with a push of some buttons. Only two D-150 films were made THE BIBLE: IN THE BEGINNING… and PATTON. Does anyone know if either of these movies played in D-150 at either of these theatres. At the Oak Brook thatre they had an open house before movies started playing. I went and got a book on D-150 (I hope I have it in my vast archives but I think it got destroyed by accident). They showed a demo film on D-150, I dont remember much about it, but I guess it started with a roller coaster ride. Anyone fill me in on more of the demo movie? I have often wondered if any D-150 theatre ever showed a non D-150 movie useing the full screen and the D-150 Super Curvulon Projection Lens. It is my understanding that the full screen and the D-150 lens was only to be used for D-150 films and not other 70mm. Anyone know anything about this? Of course it was never the same after it was twined, but alas it was torn down and I think of it often and it’s sad to drive by!

Bob, I don’t know for sure if either THE BIBLE or PATTON played the UA Cinema but I know for a fact (I have the bookings for River Oaks 1 from the day it opened in 1969-1981) that neither played at River Oaks. I also have the bookings for the UA Cinema from 71-79 so there is a chance that PATTON could have played there but I would guess THE BIBLE probably didn’t. Also just to correct something in the top description, the theater was twinned in 1972. The second screen opened December 22 with the premiere attraction of “Sleuth” (FYI – The Christmas movie in theater 1 that year was “Young Winston”).

I used to go there a lot as a kid. My mom took us every Tuesday because it was the cheap day. I saw “The Spy Who Loved Me” and they had the Lotus “submarine” car on display. I remember when it was demolished and was sad to see it go.

You can see the property if you exit I-88 after the Oakbrook toolbooth. It’s the parking garage on the right.

I took pictures this weekend of the UA Cine in Dallas.

As noted in the article to which Lost Memory linked above, the UA Cinema 150 in Oak Brook, like its counterparts in Dallas and in Santa Clara, California, was designed by San Francisco architect George Raad, George Raad & Associates. However, the Boxoffice article also lists the firm of Keys & Hestrupp alongside Raad for the Oakbrook project only. This was probably a local firm that supervised the construction for Raad’s distant office.

Also, I have a suspicion that Boxoffice might have misspelled one of the names (Hestrupp might actually have been Hestrup) but I’m not positive. What I can find is a .pdf about architectural resources in the village of Glen Ellyn, Illinois, which mentions a firm called Keys & Hestrup, and an error in Boxoffice seems more likely than an error in a local architectural survey.

the UA Cinema 150 looked like a beautiful theatre. Too bad it was twinned, and then, ultimately closed down.

A great theatre for a big film like OLIVER!

This opened on June 19th, 1968. I uploaded its grand opening ad in the photo section. I remember seeing ‘For Your Eyes Only’ and ‘Clash of the Titans’ here. Sad to see it go.