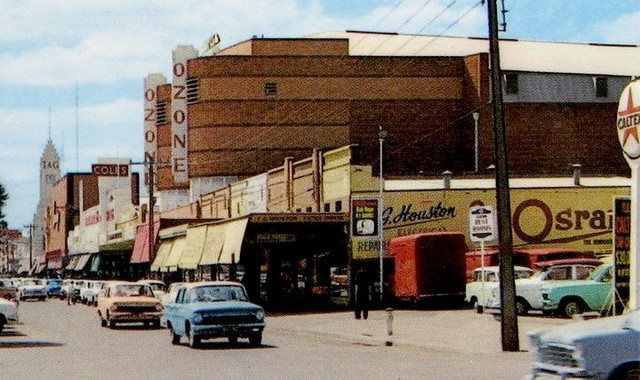 Mildura is in northwest Victoria, the center of the state’s grape growing and wine production. The Ozone Theatre was a big addition to the city, built by the Waterman brothers who operated a chain of cinemas known as Ozone Theatres in neighbouring South Australia.

The architects were Taylor and Soilleaux who broke tradition with a double curved façade instead of the usual flat Art Deco style design. Seating initially was 842 in the stalls and 336 in the dress circle. The colour scheme inside was a series of cool greens and the slanted walls allowed for ventilation ducts to handle the high temperatures common to this region. Opening day was December 15th, 1938, with Alexander Korda’s “The Drum” starring Sabu and Raymond Massey.

Hoyts Theatre took over in later years and closed the Ozone Theatre on 23rd June, 1971. The final program was “Ryan’s Daughter” with Robert Mitchum and John Mills.

The building stood empty for several years until it was replaced by a Commonwealth Bank.