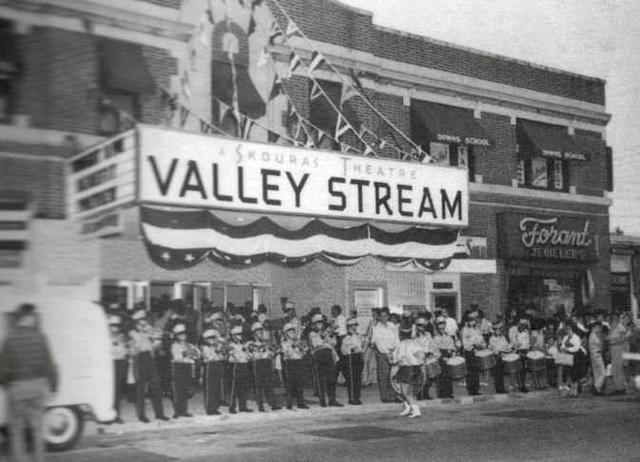 Located on a side street off of Sunrise Highway, the small marquee and front was deceiving for such a large house. The 1,800-seat Valley Stream Theatre was opened by 1926 when it was operated by Fox Metropolitan Playhouses Inc. By 1932 it had been taken over by Skouras Theatres.

One time a first-run RKO house, it later went bargain prices and played double features. In the 1980’s there were concerts and live shows here, and it was known as the Rio Theatre which closed on October 18, 1982. The theatre has since been demolished.

I saw quite a few interesting films at the Valley Stream. I saw The Brood (1979) and Prophecy (1979). I know they played Amin – The Rise and Fall (1981). And I remember seeing a midnight showing of the Exorcist there, it was raining outside and water was dripping in from the roof, I was in the balcony. A couple was screwing a couple of rows behind me and my friends. The place was very warn down. I went to the site as they were demolishing it around ‘97/'98. I took one last look in at the chandelier and roof. I was working for Henry at the Malvern and he told me they had already started ripping it up. By the way, Slipped Disc is also gone now…One of the sons who run the ice cream eatery down the street saw a double bill of Headless Eyes and The Ghastly Ones there back in the early seventies.

It was the Belair Theater ,operated by B.S. Moss

Thank you so much….it’s been driving a couple of us crazy trying to think of the name.

Finally found a photo of the place! I found it in a group of public photos on the Facebook group called “I grew up in Valley Stream in 1970-2000.” Appears to be a newspaper clipping about The Rio – possibly the 8/6/94 article from Newsday that I posted about back on November 6, 2007.

Anyway, here is the image.

From the bunting and pennants that adorn the marquee, one would think the photo depicts opening day festivities, but the van on the left side of the image and the attire does not appear to be vintage 1925. Perhaps the theater was decorated for some sort of Village celebration or Holiday? Unfortunately, the scan blurs the left side of the picture and the titles on the side panel of the marquee are completely illegible.

From the Long Island Librarry Resources Council’s Long Island Memories website – this view of the ground-breaking for the Valley Stream Theatre, dated circa 1926. Here is another image of the same.

Both of these are a part of the extensive Calderone Theatre collection of the Hofstra University Library. I must say, I was very disappointed that there were no more than these two images associated with this particular theatre. Perhaps the library contains additional photographs that have yet to be digitized. I must call and find out what kind of access one might be allowed for research purposes if not a student of the University.

I can’t even begin to tell you how many movies I saw at the Valley Stream, from my childhood in the 50s. I still can’t quite accept the fact that it’s no longer there. I know, for a fact, that the last movie I saw there was Mel Brooks' “High Anxiety” in 1977. By that time I was a 27 year old adult living in Brooklyn, and I drove out to Valley Stream to meet my lifelong best friend to see the movie. It was a bitterly cold and snowy winter day, and there was only a handful of people in the theater. We were the only ones laughing at this comedy!

My dad took e to see “High Anxiety” there as well!! I was a bit young but still loved it. Apple Dumpling flicks, Love Bug, etc. I took my sister to see John Stamos sing there! Was so funny.

Exislander, my wife’s first concert was Stamos at this theater! She’s 9 years younger than me, so our “firsts” are offset accordingly! I saw Bob Weir of the Dead here, but that was several years after my first concert!