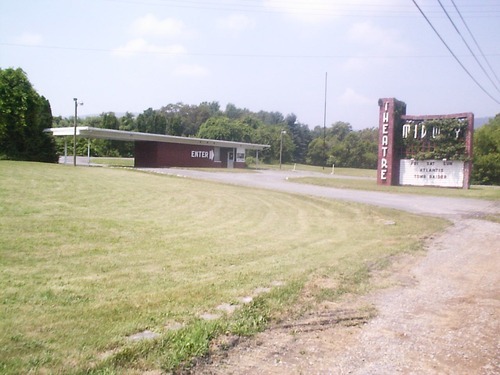 The Midway Drive-In opened May 17, 1950 with Betty Grable in “When My Baby Smiles at Me”. It opened as a single screen with a second screen later added. The car capacity is 500. The drive-in is open seasonally from May thru September and has made the conversion to digital projection.

Somebody at the Juniata County Historical Society wrote that the Midway’s opening night was May 17, 1950. “The Berneys, Irvin and Doris, were the first proprietors and showed the film ‘When My Baby Smiles at Me,’ in Technicolor that first night.”

A note in the April 11, 1953 Billboard magazine read, “Percy A. Niemond … will transfer to the Midway Drive-In, between Lewistown and Mifflintown, Pa., owned by Irvin Berney.”

The International Motion Picture Almanacs also listed the Midway under Lewistown, beginning with the 1951-52 edition. By the next edition, it added the capacity (400) and owner or booker of W. M. Humphreys, which evolved to William Humphreys by 1959. By the 1963 edition, the owner changed to Frank Royer, and that’s the way it stayed through the final IMPA list in 1988.

Scraping for more clues, I saw that the drive-in’s domain is currently registered to Jeff Favuzza.

Which led me to the Philadelphia Inquirer of Aug. 5, 1992: “Owners of the Midway Drive-In say their patrons were illegally searched by police, who charged 75 people with underage drinking.” Part owner Joseph Favuzza was considering a lawsuit. “What we’re trying to do is right a wrong, said his son, Jeff Favuzza, the drive-in’s manager. The story also got picked up by the Associated Press.

One last note from Billboard, June 17, 1950 issue, datelined “PHILADELPHIA, June 10 – … Other drive-in openings in Eastern Pennsylvania area this week included … the new Midway Drive-In opened by the Berneys near Lewistown”

And one more thing – As I type, the main description says the Midway has two screens, but I only see one on Google’s satellite view and the drive-in only lists one double feature on its summer web site (as retrieved from archive.org). Perhaps that note is inaccurate?