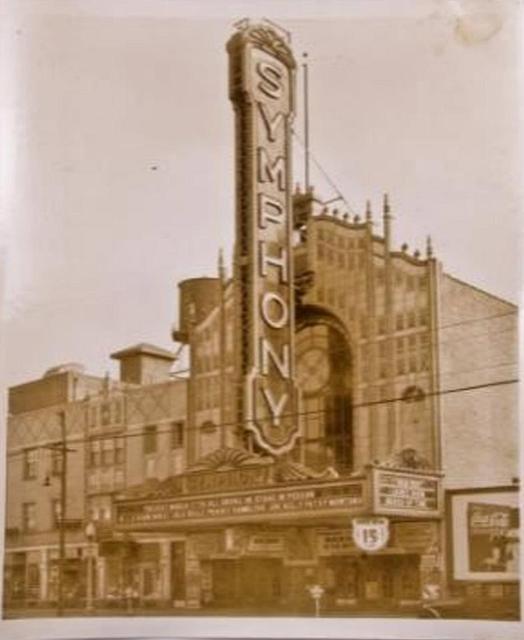 The Symphony Theatre was opened by United Theatres Corp. on December 29, 1928 with Marceline Day in “Stolen Love”. Seating originally around 2,000, it was located in the far western Chicago neighborhood of Austin. It stood on Chicago Avenue near Lamon Avenue. During the 1930’s and 1940’s, it was operated by Warner Brothers Circuit Management Corp., along with a number of other mainly South Side movie houses in the city.

The Symphony Theatre closed around 1951 and was razed in November 1965. A parking lot is on the site today.

There was a story in the Austin (IL) News on 3/3/65 about the impending demolition of the Symphony:
http://tinyurl.com/5j2mta

(Austin News, April 14, 1965)
Testimony on one of three recent police cases involving the gutted Symphony theater, 4937 Chicago, will be introduced at Tuesday’s court hearing by Commander John Neurauter of the Austin station.
The case involves a young teenage girl, reportedly forced inside the abandoned theater by two 12-year-old boys and a 13-year-old who attempted to attack her before she was able to flee.
Records of three recent fires in the building will also be submitted to the court. Chief Franda Murphy of the fire prevention bureau has evidence he also promised that he would present at the hearing set for 2 p.m. Tuesday in room 1108 to the hearing and the inspector in court to testify as to his findings.
A health department inspector has also been asked to report on his findings regarding the health hazards caused by rats and pigeons in and around the theater before Judge Richard Napolitano.
An ACO delegation will attend the hearing with some members expected to testify on their own observations of conditions both outside and inside the theater, vacant for nearly 5 years, was done by members of the Austin Community organization housing committee who volunteered to comb the files entry, technically should have no effect on the city’s efforts to obtain a demolition decree from the court.
“In 1963, the state legislature, of which Judge Napolitano was a member at that time, passed an amendment which would allow granting of a demolition order against a building, even when it was boarded up,” pointed out Timothy O'Hara, acting head of the building code enforcement division of the corporation counsel’s office.
Prior to passage of the 1963 amendment, owner of a vacant and dilapidated building could avoid a demolition order simply by securing the building against entry. This was what Pielet did during the 1962 court case on the Symphony. He told an ACO committee last Thursday that he had signed contracts to install an overhanging door at the alley side of the theater as well as steel plates over the broken windows at the front.
Several neighbors, accompanied by Jim Feeley of the ACO, were easily able to obtain entry to the theater recently when during an inspection of the theater they ran across the janitor chasing four youths from the premises.
“The door was open so we went inside,” Feeley explained. Mrs. Patricia O'Leary, 5037 Superior, one of those accompanying Feeley that day, said she was repulsed by all the dead pigeons lying
around on the floor inside the building.
“There were bricks, bottles and debris all over the inside,” she said, “but the pigeons were the worst. Right in the front by the entrance there’s a ceiling chandelier hanging about two inches off the ground. I’m told the children swing back and forth on it when they get inside."
Getting inside isn’t too difficult, the ACO members discovered again as they emerged from the theater.
"A group of three or four boys came over to us,” she added, “and asked us if we were trying to get inside. They offered to show us how. That is being a little too helpful!”

We are glad to see a group of North Austin citizens interesting themselves in the empty, eyesore Symphony theater building that has disgraced the appearance of Chicago ave. for too many years.
Over the years this newspaper, virtually alone, has kept tabs on this building, calling attention to whatever problems existed and urging the city to enforce the building code to have them corrected, and encouraging various plans announced to put the building to a constructive use that would benefit both the owner and the community.
Now city inspectors have reported that the building is more than 50 per cent deteriorated, which means the court could order it demolished.
The Symphony’s owner has taken exception to the campaign started by the Austin News. He contends that his structure represents a sizable investment, is not a neighborhood nuisance and that he is endeavoring to rent it.
The citizens group is compiling evidence on the nuisance charge. We submit that because its appearance makes it stand out like a sore thumb, a derelict theater is of more community concern than the ordinary store or office building. Theater architecture is an advantage to the theater owner when business is good, but it is also an extra burden he must bear when times are bad. Fifteen years appear to be ample time for the owner to do something with the building.
The Symphony is not the only theater building in this condition on the West-Northwest Side or in the city at large crying for attention. Wherever they exist, these buildings cast a pall on the area surrounding them.

(The Garfieldian, April 7, 1965)
Car Smashed by Bricks From Decaying Theater
Falling bricks from the decaying Symphony theater, 4937 W. Chicago, broke the windshield of a car parked in an adjoining lot Saturday.
Neighbors said the bricks came within five feet of the sidewalk, on which there was a steady flow of Saturday shoppers. Witnesses also said it was fortunate that children who frequently play in the parking lot were not present when the bricks plunged to the ground. “This is not the first time this has happened,” said Robert Rowley, a salesman for Harlo Electric Co., 4941 Chicago, car owner, “but when it does I’m always glad the damage is caused to a parked car instead of some child playing in the lot or a passer-by on the sidewalk."
The bricks fell from the west side of the theater, a structure that has not been used for 15 years which the city is currently suing to have torn down on the grounds that it is 56 per cent depreciated.
Rowley said that he and other employes of Harlo who park in the lot have had their cars nicked frequently by falling pieces of brick and mortar from the crumbling wall of the 40-year-old abandoned theater. "It seems to happen mostly during temperature changes from hot to cold or vice versa,” he said. “The things just start flaking off that building, nicking the paint on our cars. It’s very annoying because we can’t use but half of our parking lot. We try to park at the side of our own building instead of by the Symphony. Wish I had on Saturday."
The Symphony, which has been in and out of court since 1961, is currently set for its next hearing on April 20 before Judge Richard Napolitano, when the city hopes to enter its petition for demolition of the structure. Members of the AGO housing committee and affiliated Central Austin organization are compiling all available records from police, fire and health departments for presentation in
court at the next hearing. The committee, headed by the Rev. Joseph Ognibene, of Our Lady Help of Christians parish, has invited Symphony owner Dave Pielet to attend its next meeting on the theater set for tomorrow (Thursday) at 8 p.m. in the Austin YMCA, 501 N.
Central.

“What are you doing? Get out of my building!” Dave Pielet, owner of the dilapidated Symphony theater, screamed hysterically at a Community Publications reporter Monday.
The reporter was standing in the middle of the public sidewalk surveying the debris-filled interior of the 4935 Chicago ave. theater.
“If you don’t,” he shrilled, “I’ll slap your face!"
With that, he jumped into his big car, gunned the motor angrily and sped away.
Earlier in the course of this sidewalk interview, third of a series of lunch hour encounters with the theater owner, Pielet suggested an alternate campaign for this newspaper in lieu of concentrating on the eyesore theater.
"If you want to do something,” he suggested in a voice loud enough to cause passersby to turn and stare, “why don’t you take care of all these taverns. There’s one, and there’s one and there’s one. I don’t like them in my neighborhood,” he concluded.
Pielet, who gained a month’s stay of execution on an order to demolish the theater on the basis of a building permit calling for $20,000 in repairs, refused to comment on the type of business the theater will be used for. Manager of one of the stores housed in the Symphony theater building said he didn’t know if there was a prospective tenant. “He keeps saying he isn’t ready for a tenant,” commented the store manager, “so I guess all we can do is wait and see.” The case is scheduled for its next hearing before Judge Richard Napolitano on Aug. 17.

billDeMaria I’d Love to see interior photos of the Symphony. If possible can you please email them to me or

Any interior photos of this place?