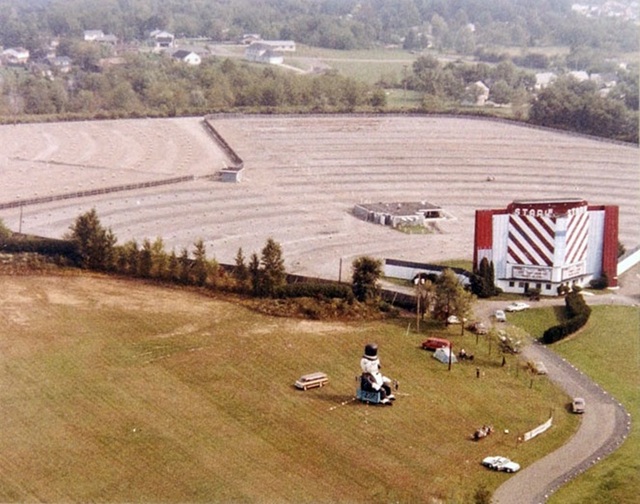 The Stark Drive-In opened on July 3, 1948, featuring the 1947 drama “Black Gold” with Anthony Quinn, Katherine de Mille and Elyse Knox. The second feature was the short subject “Hawaiian Memories” and a Bugs Bunny cartoon “Hair Raising Hare”. The drive-in was opened by the Skirball Brothers from Cleveland, Ohio. It was the first drive-in theatre that the Skirball Brothers built and operated. The parking ramps had a car capacity of 600 cars in the beginning. It featured RCA projection equipment along with RCA in-a-car speakers. In 1955 the screen tower size was increased to 110 ft. x 50 ft. for the screening of CinemaScope pictures. In addition to enlarging the screen, the sound and projection equipment were also updated. The parking ramp capacity was increased to 1,000 cars.

Over the years many of drive-ins going into the 1970’s and 1980’s were twinned, so Skirball twinned the Stark Drive-In in May of 1978. Skirball Consulting and Investment finally closed the drive-in, in 1985. The Stark Drive-In was demolished and redeveloped into a retail shopping center.

What is that giant man sitting in a giant chair doing there, near the screen?

Looks like there a car behind the giant man too?

There was also a second cartoon on the opening night(“Kitty Kornered”).

Why the name Stark?

Located in Stark County, named after a Revolutionary War Officer.