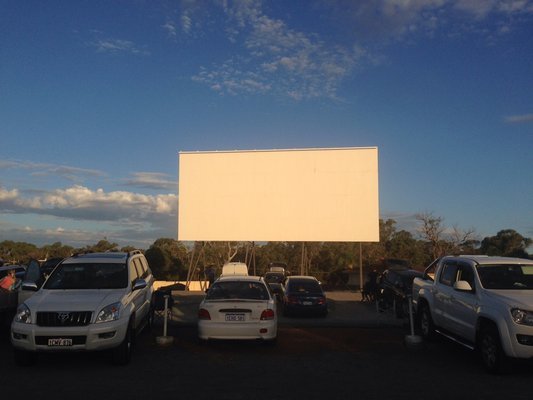 Located on Goollelal Drive opposite the western end of Hocking Road in Kingsley to the north of Perth. The Galaxy Drive-In opened on 1st November 1973 with “80 Steps to Jonah” and “What’s Up Doc”. The Galaxy Drive-In was used for some of the dance and fight scenes in the film “Love in Limbo”.

Uploaded two photos of the Galaxy. Any clue as to the number of cars it can accommodate? Doesn’t appear very large from the picture.

No idea how many cars it holds,but it is at least 100? The website for the Drive-in is galaxydrivein.com.au

The Galaxy Drive-in is the last remaining operating drive-in in the Perth metro area!

Looking at Google earth, it looks like the Galaxy Drive-in hold about 150 cars.

Has tnis drive-in converted to Digital yet?

There will be a drive-in sleep in at this drive-in on 18/10/2019. The website is https://www.driveinsleepin.org.au