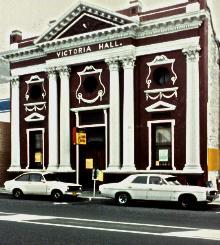 Victoria Hall opened on 28th September 1897. Victoria Hall showed pictures in the winter months(dates of opening and closing unknown?), when the Olympia wasn’t open. The hall was used by the Salvation Army(opening in 1970’s or 1980’s?) as an op shop, until they moved out(to a new location when the stage was declared unsafe(in the 1980’s or 1990’s?). The hall was renovated and used by the Deckchair Theatre Company(until they closed down in(2012?). The hall is now used by Beaumonde Catering, and the Fly By Night Musicians Club(after they moved out of there previous building). Victoria hall has been given National(Australian) Heritage listing.