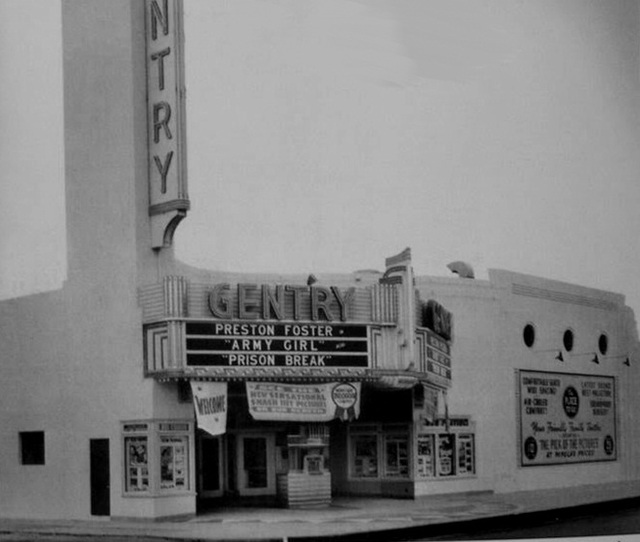 Built on the site of the Sunbeam Theatre, which burnt down. The Fox Gentry Theatre opened in 1937 and was designed by noted architect S. Charles Lee. It was one of many theatres that was a part of the South Central.

Prison Break was released in Denmark on February 9 of 1939, under the title OprÃ¸r i fÃ¦ngslet.

I went to that show. It was a blast.

Work has begun this week on three new Fox West Coast theaters for this territory. First of the trio is the Lugo, 650-seater in Bell, which is being scheduled for a March 1 opening. Ground was broken at 64th and Compton Boulevards, where the Sunbeam, a 1,000-seater, will be built and construction was also begun on the Hippodrome at Bakersfield.

That may have been a proposed name, given the previous Sunbeam that was at that address.

If you look at the 1938 photo from March 2008, you see the same portholes as the Vern in Los Angeles and the American in Newhall. All three are S. Charles Lee theaters, of course.

I used to watch movies there in the early 1950s and would walk to Miramonte School at 68 Street from 59 Place passed it many times before it closed. The fancy sidewalk in front of the ticket booth is still there. It was a nice neighborhood theater as was the Fox Florence a few blocks south on Florence Ave. During the 1950s a young kid could walk to school or to theaters on weekends without trouoble from gangs. It was a great time to grow up in.