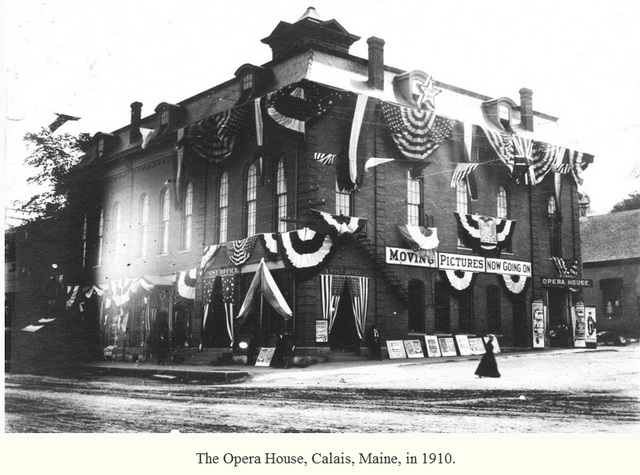 The Saint Croix Opera House was opened around 1871. Movies were first screen here in 1903 and it later became a full time movie theatre. In 1926 it was listed in the Film Daily Yearbook with 1,000 seats. It was destroyed by fire May 2, 1935. At that time it was part of the Lockwood & Gordon Enterprises chain.

Was this opera house later known as the State Theater? There is a list of Lockwood & Gordon circuit theaters in the 1942-43 edition of the Motion Picture Almanac which lists a State Theatre in Calais, but not the Opera House.

To answer my question above, the State Theatre was a seperate theater, later called State Cinemas, and was not a renaming of the St. Croix Opera House.

A rather long and chatty article about the Saint Croix Opera House can be found in this PDF. The house was built around 1871, following a general conflagration that destroyed its predecessor along with much of the town of Calais. Movies were shown as early as 1903, but it did not become a regular movie house until somewhat later. The last performance was on May 2, 1935. Later that night the Opera House was destroyed by a fire.

This page from the same web site has several photos of the Opera House, including some depicting its ruins following the fire. Near the bottom of the page are a few photos of the State Theatre, which was in operation by 1931, and which, on March 4, 1958, also met a fiery fate.

Listed under Calais in the 1897-98 edition of the Julius Cahn Official Theatrical Guide is the “St. Croix Hall” which is probably this theater. There are no street addreses in this Guide. It had 614 seats and was on the second floor. Gas illumination. The proscenuium opening was 25' wide X 17' high, and the stage was 22 feet deep. There were 6 to 9 musicians in the house band. Hotels for show folk were the Border City and the St. Croix Exchange. Newspapers: Calais Times and the St. Croix Courier. The 1897 population was 15,000.