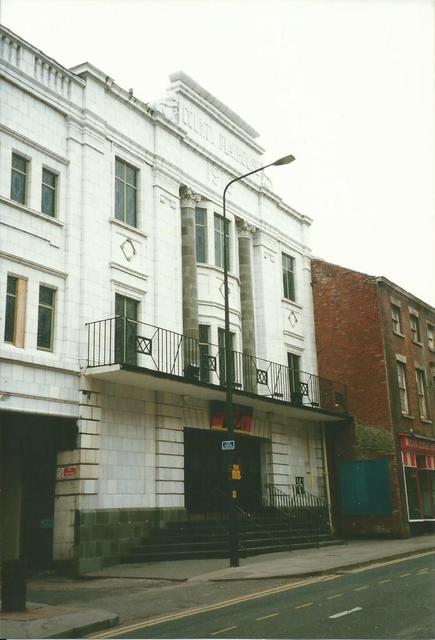 In Wigan town centre, construction began on the County Playhouse in 1916 (which date can be seen on the building’s white-tiled frontage). However, due to a shortage of materials and labour during World War I, it was not completed until 1919.

The cinema opened on 22nd December 1919 with “The Peril Within”, starring Dorothy Gish. The first ‘talkie’ was the highly acclaimed “Broadway Melody of 1929” with Bessie Love and Charles King, which opened on 16th September 1929.

A 2Manual Christie organ was opened by H. Ward on 24th December 1930. The cinema became host to many distinguished organists over the years. In 1932 & 1933 it was operated by the J.F. Emery Circuit.

In 1936, to assist the hard of hearing, ear-phones were provided so patrons could hear the soundtrack via the specially adapted Ardente system.

In 1938 an early experiment with 3D was tried with a short novelty film produced by Pete Smith called “Audioscopik”.

Despite the presence of the organ, in 1940 the manager, Thomas Moran, introduced musical interludes of 30 minutes of recorded music twice a week before the films were shown. These were advertised as ‘Programmes of Good Music’, with records provided by the Wigan Recorded Music Society. Mr Moran had hoped to introduce wartime patrons to the classical orchestras and soloists then appearing in Manchester and Liverpool, but this was short-lived, and the music was again left in the capable hands of the resident organist.

A major fire in 1949 almost destroyed the County Playhouse, but owners Eagle Picturedromes carried out a complete refurbishment in record time. Further alterations in 1954 prepared the cinema for the wide-screen era, with the VistaVision production “Three Ring Circus” starring Dean Martin and Jerry Lewis, opening on 14th February 1955.

The County Playhouse closed on Sunday 13th November 1966 with Disney’s “The Sword and the Stone”. It was taken over by the Leeds Based Star Cinemas chain and they converted it into Star Bingo and Social Club opened on 24th November 1966.

The building has since been used as a discount store and Playhouse Club Café. In more recent times it has been home to the 1,200 capacity Pure Nightclub.