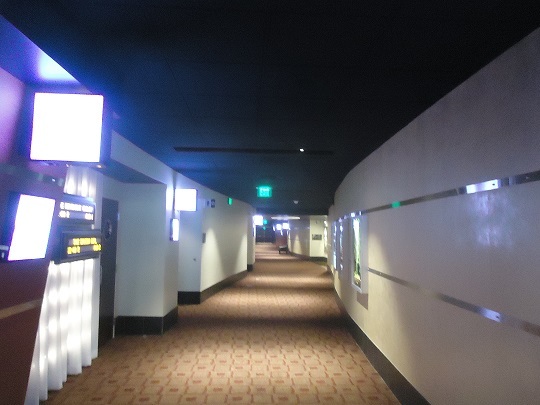 The ArcLight Santa Monica is a newly opened (November 15, 2015) structure on top of the Santa Monica Place Mall (an outdoor mall built in 1980). As typical of the chain, it offers black box theatres and luxury amenities. It is the first new theatre to be built in the city since the 1980’s.

Not to be confused with a proposed second ArcLight cinema in Santa Monica, which would be located on 4th Street, have 12-16 screens and seat roughly 2,700. The company hoped to begin construction in 2016 or 2017, but the plan was abandoned in 2017.

I paid a visit to this complex today for an aborted attempt to see “Heart Of The Sea.” Basically, this is a standard run of the mill complex. Sadly, all the screens, except 7 which is the so called “ArcLight Widescreen”, are locked 1.77:1 or 1.85:1 aspect ratios. No side masking to be seen in any of the auditoriums. I was told they have “top and bottom masking.” I was in cinema 1 which was supposed to feature Dolby Atmos. The screens have some noticeable distortion when a ‘Scope image is projected. It is noticeable on the bottom of the image, which makes it look like the screen is “sagging” in the center. For event movies, I will continue to patronize Regency’s Village theatre instead. I did snap some pix of auditoriums 1 and 7 (which are the two “Dolby Atmos” cinemas.

I went to the ‘soft opening’ in early November. I was told I was the first person to watch a film in theatre #9. It seemed like a nice theatre, very pleasing to the eye and comfortable. I’m used to the Hollywood location but this is a nice version of Arclight “lite”. They use the space well and what they were able to do represents Santa Monica quite well. It is not a close enough venue for me to patronize all the time, but I will attend again if I am able to.

I went today to the The Big Short. Took pictures which I just added.

Saw Hail, Caesar! in #6 today. Turns out they only built 12 screens, not 14 as was being reported in the papers. Also, 1 and 7 are the largest auditoriums, each seating about 266.

A plan to bring Santa Monica its second ArcLight movie theater and its first giant IMAX screen have fizzled, reports the Santa Monica Lookout. The negotiations between developer Macerich G3 and the city dissolved after the developer “pulled out over issues of profitability,” the Lookout says.

Part of the reason why the developer thought the new theater complex would not be profitable is that about two years ago, another Arclight opened less than a half mile away, at the Santa Monica Place shopping center.

The proposed ArcLight was planned for Fourth Street near Arizona, on a site now occupied the 325-spot Parking Structure 3.

The new ArcLight would have held as many as 16 screens, including Santa Monica’s first IMAX screen, in a four-story complex.

Though the ArcLight project is not moving forward, Jason Harris, the city of Santa Monica’s economic development manager, told the Lookout that city planners are going to revisit the movie theater project in the fall with the City Council and see if the project could be revived with another movie theater.